So, did you know you can speak Greek?

Today’s blog post is written by Konstantia Sotiropoulou, who’s been helping us to translate and record our Maths apps in Greek.

I bumped into the picture below a while ago and I thought this should be interesting. Undoubtedly, Greek is one of the richest languages in the world and is distinguished by an extensive vocabulary. In the past, the Guinness Book of Records ranked the Greek language as the richest in the world with 5 million words and 70 million word types! 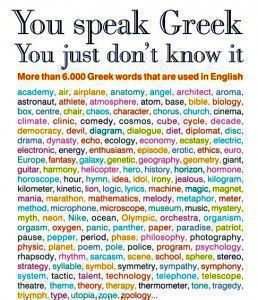 The front cover of You speak Greek, You just don't know it, a book by Annie Stefanides (Ianos, 2010)

Well, many of these words have been widely borrowed into other languages, including English. Greek roots are often used to coin new words for other languages, especially in the sciences and medicine. Mathematics, physics, astronomy, democracy, philosophy, athletics, theatre, rhetoric, baptism and hundreds of other words are Greek. Moreover, Greek words and word elements continue to be productive as a basis for coinages: anthropology, photography, telephony, isomer, biomechanics, cinematography, etc. and form, with Latin words, the foundation of international scientific and technical vocabulary, e.g. all words ending with –logy (“discourse”). Interestingly, an estimated 12% of the English vocabulary has Greek origin. Greek has contributed to English in several ways, including direct borrowings from Greek and indirectly through other languages (mainly Latin or French).

In a typical 80,000-word English dictionary, about 5% of the words are directly borrowed from Greek; this is about equivalent to the vocabulary of an educated speaker of English (for example, “phenomenon” is a Greek word and even obeys Greek grammar rules as the plural is “phenomena”). However, around 25% are borrowed indirectly. This is because there were many Greek words borrowed in Latin originally, which then filtered down into English because English borrowed so many words from Latin (for example, “elaiwa” in Greek evolved into the Latin “oliva”, which in turn became “olive” in English).

Greek and Latin are the predominant sources of the international scientific vocabulary. Greek is often used in coining very specialized technical or scientific words, however, so the percentage of words borrowed from Greek rises much higher when considering highly scientific vocabulary (for example, “oxytetracycline” is a medical term that has several Greek roots).

In education, an excellent way to build vocabulary is teaching students how to find roots in words. Since many words have their base in the Greek language, beginning with the roots from this ancient language is a good place to start. This list of English words with Greek origin will give students a basis for further exploration into the roots of the English language.

Now you that you have seen how many Greek words you know, I am going to teach you some more common ones like “kalimera” which means “good morning”, “Ya sou” which means “hi”, “Me lene” which means “my name is” and “efharisto” which means “thank you”. And if you are interested in learning more and discovering how many you already know, try EuroTalk’s uTalk Greek app.

And who am I to be talking about the Greek language? I am the Greek intern of EuroTalk, who translated and recorded into Greek their new Maths apps for young children. An interesting and fun experience for a young translator like me. I have to say that I really enjoyed working in this office, which gives you the sense of a family home. People here are calm and friendly, the kitchen is fully equipped with all kinds of snacks and during the day we get to listen to nice music while working! How amazing is that?

Maths, age 3-5 and Maths, age 4-6 - the apps I translated and recorded during my time at EuroTalk

I started towards the end of January by translating the scripts of the app and soon after I recorded the first topics. I caught myself playing the app more than I needed to, as the games are really fun! I am sure young kids will truly enjoy it while learning basic Mathematics rules. And I know that my three-year-old niece, who will be playing the app in a few weeks, will at least have a constructive and educational first contact with technology!

So, whether you want to take up a new language or help your child have a nice start with Maths, you know that EuroTalk is here for you!

* There is an interesting video on YouTube that explains the History of English and the influence that it had from other languages!