Something Borrowed: when one language just isn’t enough

After reading Konstantia’s post a few months ago about how many of our everyday words come from Greek, I started to think about where some of our other words came from. You might think that we are the ones influencing everyone else (words such as wifi in French, surfear for surfing the net in Spanish, and a lot of business jargon in German –  downloaden, ein Workshop, ein Meeting and so on…), and of course that’s true. Most new inventions (the Internet, computers and related tech such as wifi) are named by Americans, and therefore the English word is often passed along to other cultures and absorbed into their languages. You’ll also find many non-English speakers throwing in English phrases amidst their native tongue. Any other Borgen fans will probably have noticed the way that characters casually use phrases such as ‘on a need to know basis’ whilst otherwise conversing in Danish. Clearly our language, especially in the business, IT and entertainment domains, has a huge global influence. 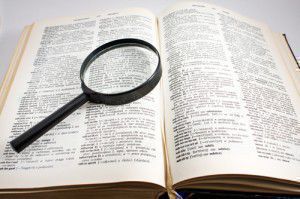 However, if you look a little further back, you’ll find us doing exactly the same thing. It might seem incredibly cool to Europeans now to use English or merely ‘English-sounding’ words day to day, but we’re just as guilty of language-envy or just pure laziness with French, especially. How to describe that annoying feeling of being sure you’ve already seen or done something? Déjà vu, of course. Not to mention dozens of other words and phrases we all use on a daily or regular basis: laissez faire, enfant terrible, a la carte, a la mode, arte nouveau, en route, faux pas… I could go on for pages. You’d probably struggle to go through a day without using at least one or two obviously French words. It’s almost as if we simply couldn’t be bothered to think of our own words for some of these things, although I also suspect it has a lot to do with our associations with French as chic (another one!) and sexy. This is especially true in the beauty industry, which explains the proliferation of products labelled visage or with names like touche eclat remaining in their original alluring French guise.

French is the best example, as they are our nearest geographical neighbours, and historically one of our closest political connections, which explains the huge interconnection of our languages. However, as soon as you think about it, there are hundreds of other words that have crept into our parlance from other languages. Words like Zeitgeist and one of my favourites Schadenfreude have come over from German, whilst our food vocabulary owes a lot to Spanish (salsa, jalapeno, tortilla, nacho, paella…)  We’re also becoming ever more familiar with words and especially foods from China and Japan. Sushi, sake, kimono, karate, karaoke and so on are everyday words to us, whilst we happily order bok choy, chop suey and chow mein without even thinking about it, not to mention concepts like yen, zen and feng shui. Taekwondo has made its way over from Korea, whilst we’ve taken words like bamboo and paddy from Malay.

This is just a quick look at some of the more obvious ways that our language has spread globally, and how many words we have absorbed from nearby European countries, but also from more distant Asian cultures. We’re such a global country, and it’s strongly reflected in our language. We’d love to hear more examples of English words creeping into other languages or other foreign words you’ve noticed in English, so feel free to leave a comment below!