10 popular expressions we owe to Shakespeare

Today is the official anniversary of William Shakespeare’s birth. (23rd April is also the day he died, but let’s not dwell on that.) For those of us who speak English every day, we often forget, or don’t realise, how many of the words and phrases we use come from the works of Shakespeare.

Of course we don’t know for sure that he invented them all himself (although apparently about a tenth of the words he used in his work were new). But it’s interesting to see how many of us, even those who claim not to be fans of his work, are regularly quoting Shakespeare.

There are so many examples of these – here are just a few.

What does it mean? Jealousy.

“IAGO: O, beware, my lord, of jealousy;
It is the green-eyed monster which doth mock
The meat it feeds on”

Cruel to be kind 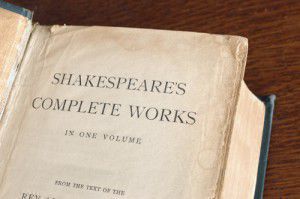 What does it mean? Treating someone badly for their own good.

“HAMLET: I must be cruel only to be kind.
Thus bad begins and worse remains behind.”

It’s all Greek to me

What does it mean? Completely incomprehensible.

“CASCA: those that understood him smiled at one another and shook their heads; but, for mine own part, it was Greek to me.”

What does it mean? To get a conversation going, often by breaking some initial tension.

Which play? The Taming of the Shrew (Act I, Scene 2)
“TRANIO: And if you break the ice and do this feat,
Achieve the elder, set the younger free”

What does it mean? In a tricky situation.

“ALONSO: How camest thou in this pickle?”

Forever and a day

What does it mean? A really long time!

Which play? As You Like It (Act IV, Scene 1)
“ROSALIND: Now tell me how long you would have her after you have possessed her.
ORLANDO: Forever and a day.”

The world’s my oyster

What does it mean? To have a wealth of opportunities.

Which play? The Merry Wives of Windsor (Act II, Scene 2)

“PISTOL: Why then the world’s mine oyster, Which I with sword will open.”

What does it mean? All at once.

Which play? Macbeth (Act IV, Scene 3)
“MACDUFF: What, all my pretty chickens and their dam
At one fell swoop?”

What does it mean? To be glad to see the back of someone.

“THERSITES: I will keep where there is
wit stirring and leave the faction of fools.
[Exit]
PATROCLUS: A good riddance.”

Eaten out of house and home

What does it mean? To take advantage of a host’s generosity.

“MISTRESS QUICKLY: He hath eaten me out of house and home; he hath put all my substance into that fat belly of his”

How many of these have you used lately? And does anyone have any other favourite Shakespearean phrases?

Personally, we’re a bit disappointed that more of Shakespeare’s insults haven’t made it into modern English; you don’t hear ‘thou cream-faced loon’ often enough these days (although maybe that’s a good thing).