What language does the voice in your head speak?

In today’s day and age, a great percent of the people travel, either for vacations, business or even a longer period of time, in search of a better job, better opportunities, to be with the loved ones and why not, just for the sake of a multi-cultural experience. While some of us learn a new language as a hobby or in school, migrants find that it is difficult to live in a country whose language you can’t speak. So this is where we get to the point of this article: how does it feel to speak another language than your native one, every day with everyone. 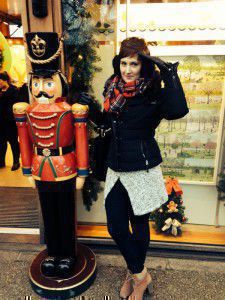 First of all, let me take you on a history trip back in the ‘90s. No, we’re not going to listen to Backstreet Boys, instead I’m going to tell you how our generation got to learn English from TV back in Romania. There was a single cartoon program back then, Cartoon Network, and it wasn’t dubbed in Romanian (like it is now), nor did we have subtitles. So we’d just watch the cartoons without completely understanding what they were saying (not that there was much conversation, but still) and I would occasionally ask my parents what does this/that mean. From the age of eight we’d eventually start learning English in school, but by then it already sounded familiar and we would only add the grammar to the equation.

Growing up, we had daily contact with American English from movies and music and by the time I finished high school I’d already got a certified advanced level.

So I was quite confident in my English; I got the chance to use it for both of the jobs I had in the years I worked in Romania, and I got along really well with the people I’d have to speak in English on the telephone or in meetings.

Last year, when I moved to London I was rather surprised to find that I couldn’t understand what these people were saying. I panicked at first but then I realised that no one is expecting me to be 100% fluent in English so I started asking questions or asking people to repeat so that I can understand properly. As I said, most of the English vocabulary I had was American, so I started picking up the differences like, ‘mug’ not ‘cup’, ‘biscuits’ not ‘cookies’ and ‘fringe’ not ‘bangs’.

At first I found it quite exhausting, and at the end of the day I wasn’t able to concentrate anymore or to use more complex words. With time, I got used to it and I started learning more and more words and expressions that I would afterwards try to use in conversations (like for example ‘I’m skint’, which means ‘I’m broke’). Also, in the first months here, I used to get nervous at the supermarket or whenever a unexpected conversation would start, fearing that I won’t find my words or that I wouldn’t remember certain things. With time, I started gaining more confidence and now, after ten months, I am easily able to have a conversation, express my feelings and ideas accurately and understand almost all what the other person is saying. I still have trouble understanding different English accents, and I would probably see myself stuck in a conversation about, let’s say, gardening tools – so certain topics with a specific word-pool.

You know how in your native language you can express your feelings and state of mind by the words you choose and by your tone of voice? Well, good luck doing that when you only know a single set of words for each thing. Also, studies have shown that sometimes people find that they can speak more freely in a non-native language because they don’t feel that the words ‘really’ belong to them, they’re not ‘their’ words.

But what happens when you spend more than half of the day speaking a different language? Your brain starts to associate certain situations, new situations that you didn’t have to deal with in your home-country, with a certain language – this is when you start to ‘think’ in another language. Some people associate this moment with the moment you start to feel like you belong to a certain culture, that your roots are starting to clench to the ground and now you’ve become (or at least moved closer to being) one of ‘them’.

So I’ve found myself in situations in which it was easier for me to express myself using an English word rather than a Romanian one, either because I found that it sounded better or because I couldn’t think of a proper translation.

It’s funny how the brain works sometimes – I got a call at work today from a business partner that also speaks native Romanian, so naturally I started talking to her in Romanian and found it very difficult to find the right words or to build the sentences without sounding stupid. I felt like I had to do a reverse-translation of what I would normally say in English.

At the end of the day, I can agree that using multiple languages really does wonders for your way of thinking and for the structure of your thoughts. Like Nelson Mandela once said, ‘If you talk to a man in a language he understands, it goes to his head. If you talk to him in his language, that goes to his heart.’