When I tell people that I lived in Geneva for five months during my Erasmus year, most say ‘Geneva, yeah…I’ve been to the airport,’ and I have to confess that I was once amongst them. The city as far as I was concerned was a necessary stop on the way towards my most adored pastime (snowboarding), and little else. Although not high up on most students’ list of places to spend a considerable amount of time, due to its costliness and largely conservative culture, I managed to find a host of affordable enjoyments in which you can partake, if ever stuck on a flight transfer or, you know, you actually decide to visit.

Switzerland has three official languages – French, German and Italian. The language predominantly spoken in Geneva is French – don’t forget to learn a little before you go…

A beautiful body of water 73km long that is flanked by the Jura mountains to the North and the Alps to the South. On a clear, crisp, winter’s day you can see the snowy summit of breath-taking Mont Blanc, which I can assure you, is the best cure for any heaviness of heart. If you buy a transport pass, it includes trips from one side to the other (at the narrower, city end) – just imagine if that were your daily commute! The lake is great for running around, swimming in and looking at from a variety of locations. Parks worth a visit along the banks are: ‘Mon Repos’ and the ‘Jardin Botanique’ on the Rive Gauche, or ‘La Grange’ on the Rive Droite. 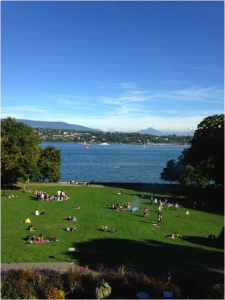 It is here that you can combine two of the most Swiss of pastimes: the eating of fondue, by a lake. Although the summer menu doesn’t offer this cheese and wine based delight, the atmosphere of the place is still something to enjoy. If you don’t fancy eating, you can also indulge in a Hammam or massage, or depending on how brave you’re feeling, jump straight in the lake. I went in in December, which I would highly recommend!

3. The ‘brocante’ at Plaine de Plainpalais

Every Wednesday and Saturday, and every first Sunday of the month, the Plaine de Plainpalais holds one of Switzerland’s largest flea markets. From old postcards to candelabras, fur coats to vintage skis, treasures abound. Food stalls selling many different international delights of various savoury and sweet description, and you could easily spend a whole morning trawling through the crates of CDs and photographs. Bargain brocante hunting!

The UN offer tours in 15 different languages, through the hallways and into the conference rooms where the world’s wrongs are put to rights. The complex is centred around President Woodrow Wilson’s ‘League of Nations’ building from the 1920s, and the view out onto the lake is in itself pretty inspiring. All in all, a worthwhile experience. 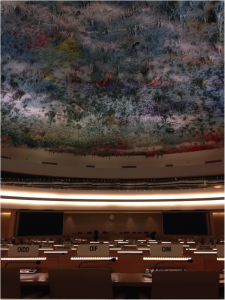 The Red Cross was founded in Geneva in 1863 with a view to offering support and relief to wounded soldiers. Since then, the organisation has grown to protect victims of international and domestic conflict. This museum was harrowing and heart-warming at the same time, with so many first-person sources, and an impressive interactive learning facility.

Ok, arguably this isn’t a reason to visit Geneva, but it’s definitely something that’s great about the city. There are 23 resorts within an hour’s drive, making a weekend break in the mountains a perfectly viable option. If you’re wanting to go further afield, many companies run regular bus services from the airport, which is only a ten-minute efficiently-run Swiss train ride away from the centre.

Situated on the hill of the beautiful old town of Geneva, this Cathedral has a spectacular panoramic view of the city and the mountains that lie beyond. The cathedral itself is an impressive structure, and inside lies the chair of Jean Calvin, one of the pivotal figures of the 16th century Protestant Reformation.

Whilst living in Geneva, I was lucky enough to attend a CERN open day and it thoroughly amazed and confused me. The European Centre for Nuclear Research is a complicated network of warehouses and research buildings that give the appearance of a large village, oh, and there’s a 27km underground Large Hadron Collider too. The visit was more science than I have learnt in my whole life, squished into an afternoon, and I left frazzled but fascinated!

I will confess that I was already an ice hockey fan before moving to Geneva, but watching Genève Servette play really entrenched my love for the sport. The atmosphere at a game is instantly electric because not only are the fans excited, but also cold, so everyone shouts and jumps right from the get go. The team are definitely worth watching too – this last season they made it to the semi-final of the Swiss National Championships where they had to play ZSC Lions seven times, and unfortunately lost out on a finals place only in the last game.

This little market town, south of the city, is full of boutiques and hosts a variety of themed markets throughout the year. There are the regular stalls selling meat, cheese, fruit and veg, but it’s worth going at Christmas time to get a sense of the community. Another favourite was when I was there in October and they had a sheep-shearing demonstration and a petting zoo, complete with a show where a sheepdog herded some geese. #Switzerweird

Have you been to Geneva? Share your own reasons to visit in the comments – and remember, we’re always open to suggestions for new places to feature!