Everyone knows the key to language learning is immersion, but upping sticks and moving to the country where your language originates from is a huge commitment and not always possible.

However. There are a few things you can do to help your learning along. Watching films (with or without subtitles, depending on how brave you are), reading an online magazine or newspaper entirely in the language you’re trying to learn, and if you’re really fearless, try changing the language on all your devices – phone, tablet, computer and so on. Just be sure you know enough words to change it back. 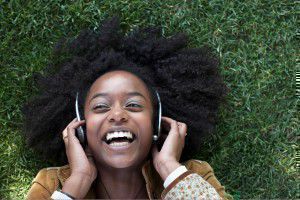 My personal favourite way though, which I actually use myself when I am learning, is to listen to music. There is no quicker way to immerse yourself in a language, learn pronunciation, subject word order, vocabulary, colloquialisms, hidden meanings and double entendres, and so on. The list is technically endless and completely adaptable to whatever level you are.

Here are my five favourite English songs that I use in class with my students; what would you add to the list?

This song is perfect for learning English. The song is played just about everywhere so it’s instantly recognisable, the pace is not slow enough to make you feel daft but not so quick as to make you feel lost, and the most important thing is that Mike Rosenberg, the singer and face of Passenger, has a beautiful, clear voice that not only is nice to listen to but easy to understand.

Another really good song for learning. Clear lyrics, slow pace, understandable voice, (thanks, Chris Martin), and an interesting video to talk or think about once you know all the words. Resultant group discussions have included trains, drinking and driving, graffiti, and the environment. Watch the video if you’re not sure why.

What is good about this one is not so much the pace of the song but the simplicity of the lyrics. The verses are really short, and Gary Lightbody’s pronunciation on this one is a gentle exposure to the Irish accent in song. If you choose this song as one of the first to learn with, you’ll feel a real sense of achievement quickly because it’s such a simple one to learn.

Music trivia for you first: did you know that this song was first written by Anthony Newley and Leslie Bricusse for the 1965 musical The Roar of the Greasepaint and has been covered by, amongst others, Nina Simone, Sammy Davis Jr and Michael Bublé? I have chosen the Muse version because I personally love Muse, plus Matt Bellamy’s voice on this one is slightly harder than my previous suggestions. Why is this a good thing? Well, the song is very recognisable and most people have heard at least one version of it, so when you hear this version you’ll likely know some of the lyrics already and will be exposed to yet another accent – and you’ll understand it. Bonus!

I am a mean teacher. Or I can be. So when I am presented with a student who says they can understand all English lyrics and I know otherwise, I give them this track to try. Because all the verses on this track are spoken, which sounds easy, doesn’t it? It’s not. The beautiful Paul Smith is from Teeside, so firstly we have the exposure to the accent and secondly, he doesn’t speak slowly at all. By the time you get to the first chorus you’ll probably throw your pen down in relief and look at your paper in alarm with the five words you’ve managed to scribble down. But it’s worth it. I promise.

If you’re not sure how to use music to learn a language, here’s my ‘how to’:

Sound easy? Give it a go!