10 of the strangest festivals from around the world

Today marks the 70th anniversary of La Tomatina, the famous tomato-throwing festival in Buñol, Spain. La Tomatina began in 1945 but didn’t become an official event until twelve years later. Today, about 30,000 people attend the festival, which begins at around 11am on the last Wednesday of August. Traditionally, the tomato fight can only begin when someone has successfully climbed a greasy pole to retrieve the ham that’s been placed at the top.

We love the idea of La Tomatina, because its only goal is for everyone to have a good time. So we had a look at some of the other unusual events that take place around the world each year; here are a few of our favourites. Please feel free to add your own in the comments!

This festival ended in 2009, sadly, because it got too big for the town of Talkeetna. But it sounds amazing – essentially it involved numbered moose droppings being dropped from a crane onto targets in the town car park; those that landed closest to the centre of a target won prizes for anyone holding a matching ticket.

Nobody seems quite sure how this bizarre festival originated, although it’s believed to have roots in the 19th century practice of wife-stealing. Competitors carry their wife (or sometimes someone else’s wife) across an obstacle course of over 250 metres, with penalties if they drop her, which seems only fair. The races are run by two teams at once, and the winner is the competitor who completes the course in the quickest time – they get to celebrate with their wife’s weight in beer.

The Songkran festival is a celebration of the Thai New Year in April, and it’s basically a big water fight. People carry water guns and throw buckets of water over each other, along with white talcum powder. The throwing of water is believed to bring good luck and prosperity for the coming year. But watch out if you’re a tourist, as apparently visitors are a particular target for over-excited locals…

The Gulal Throwing Festival takes place each March as part of Holi, which is also known as the festival of colours. And it’s easy to see why – the event involves throwing coloured powder (gulal) and water over each other, so everyone ends up covered in a rainbow of colours. As with Songkran, it’s perfectly acceptable to throw gulal at strangers – the event is all very good-humoured and looks like a lot of fun, if incredibly messy. 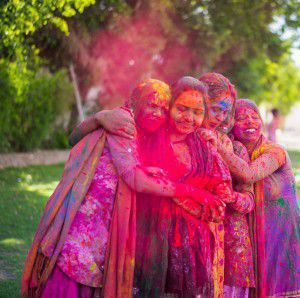 We didn’t even know this existed, but apparently the World Custard Pie Championships take place every June in Coxheath, Kent. Competing in teams of four, participants try to hit their opponents with custard pies, which they’re only allowed to throw with their left hand. They score one point if they hit an arm, three for the chest and six for a pie in the face. The competition, which began in 1967 as a way to raise funds for the village hall, now attracts teams from across the globe, and was won in 2015 by a team from Japan.

Every March, competitors come together for the world’s biggest sheep shearing event. Founded in Masterton, New Zealand, in the 1960s, the Golden Shears takes place over three days and includes competitions for all levels in shearing and woolhandling. Sheep shearing requires skill, precision and strength, which makes it an unlikely but no less impressive sporting event.

This July festival is essentially a celebration of mud, and in particular its cosmetic benefits. Between events like mud wrestling and mud sliding, you can also enjoy mud massages and the World Mud Skincare Exhibition. According to the website, if you don’t have any mud on your body, you get put in ‘prison’ until you do. In addition, visitors can enjoy the beautiful beach setting of Daechon, and there are games and fireworks as part of the festival too.

Each January, residents of Port Lincoln, Australia, celebrate the town’s biggest industry – tuna. The free festival includes tuna-themed parades and activities for the whole family. Since 1979, though, the highlight has been the World Championship Tuna Toss, which – as you might expect – involves throwing a tuna as far as you can. This year, the winners were husband and wife Matt and Shanell Staunton from Port Lincoln, who won the men’s and women’s individual events with throws of 24m and 11m respectively.

One just for the men, which features thousands of nearly-naked participants in a crazy night-time dash across Okayama in Japan. The idea is to catch a pair of sacred sticks (shingi) that have been thrown into the crowd by a priest. It can get a little frantic as the men fight to be first to get hold of the shingi, and competitors are asked to include a slip of paper tucked into their loincloth bearing their name, blood type and emergency contact number, just in case.

The Harbin Ice Festival takes place in Heilongjiang, in the north-east of China every January, and looks really quite stunning. Participants build life-size buildings and sculptures out of snow and ice, which are then lit up in different colours to create a beautiful ice city. In previous years, the art work has included everything from a fully functional slide to a model of the Sphinx. The festival lasts for a month, but the sculptures can stay up longer, if weather permits.

Have you been to any of these festivals? We’d love to hear about your experience!