I’m just about to go back to Edinburgh for my final year of university after having spent some time away from the city. I am determined to tick all of the touristy attractions off the list that make the ‘burgh a worthwhile destination, because it’s so true that when you live somewhere you don’t necessarily take advantage of the opportunities for adventure around you. Here are 10 must-sees that I have managed to experience – I wonder how much the list will have changed by this time next year!

Each year, around August time, a transformation takes over the city: almost every shop, every bar, every open space is descended on by the Fringe Festival: the biggest arts festival in the world. The first time I went I genuinely couldn’t believe the change that had come over the place I’d been living in for almost a year. There are people everywhere showcasing what they do and love best, whether that is interpretive dance or black comedy, street performance or orchestral ensembles. Some shows are free, others need to be booked far in advance, but I encourage you to go for something off the wall – with so much on offer, a disastrous morning performance can be forgotten with an incredible afternoon show!

This stretch of road runs from the iconic Scottish battlement that is Edinburgh Castle, to the Palace of Holyroodhouse, the official residence of the British monarch in Scotland. Both of these are highly recommended as places to visit, although I’ve not been to the Castle yet, as part of a university superstition. The Mile itself is flanked by terraces and shops, as well as street vendors and tours offering to show the horrible histories of the Windy City. There are also some great secret passages and alleyways that lead down to Princes Street via the Princes Street Gardens. 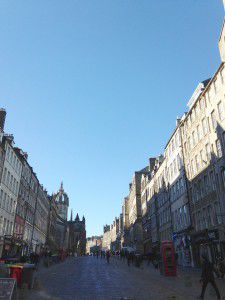 3. The National Museum of Scotland

Taking up almost the entirety of Chambers Street, including a controversial extension that holds the Museum of Scotland exhibits, The National Museum has a huge collection of artefacts from across the centuries. Although there are some temporary exhibitions that you have to pay for, you are free to roam around the majority of the museum. My personal favourite is the animal installation that spans three floors.

Edinburgh is built on many different levels, and you can be forgiven for getting lost and confused with the topography of the city. Just down from the Royal Mile, the Grassmarket and the Cowgate are ideal locations for a good bite to eat and a drink (or two). There are quirky shops to be found cheek by jowl with hostels and cafés, as well as a few clubs if that’s what you’re looking for.

It’s not a hike, but an energetic walk, and the spectacular view from Arthur’s Seat to the hills, across the sea and out over to Fife is a definite must. It’s a perfect opportunity to take in the whole city, and get to grips with the wind! 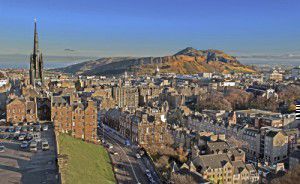 (6) Stockbridge Market on a Sunday is adorable: local produce, friendly people and all sorts of delectable goodies. There are also some lovely cafés in the area.

(7) If you’re in Stockbridge anyway, take a walk along the Water of Leith, which leads from Pentland Hills to the Forth of Firth at Leith. I’m not suggesting you tackle all 24 miles, but it makes for a different view of the city and a retreat from the hustle and bustle of the centre.

(8) The Royal Botanical Garden was founded in the 17th century, and continues to educate and explore to world-renowned status. It comprises four gardens and boasts an impressive collection of plants.

Now I’m not sure if you’ve heard, but they’ve got pandas. As well as these adorable, rare creatures, the zoo boasts the UK’s only koalas and an impressive ‘Discovery & Learning’ program for kids. If you can organise your trip for the right time, the Penguin Parade is a site for sore eyes, and other talks throughout the day are fascinating. The zoo is easily reachable by bus from Waverly Train station. 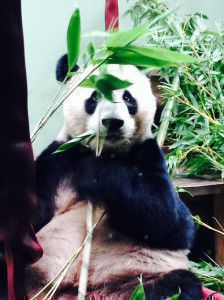 The University of Edinburgh area around Bristo Square and George Square backs onto The Meadows and further over to Bruntsfield Links. It’s a lovely spot for a little picnic or afternoon nap, and there’s sure to be people BBQ-ing too. Due to it being a student hub, you could also try out some of the lunchbox-sized lunch venues that won’t break the bank.

Have you visited Edinburgh? Share your own suggestions and tips in the comments for anyone planning a trip.

PS Because this is a language blog, we felt we should add a footnote – English is the official language of Scotland, although it sounds a little different from the ‘Queen’s English’ spoken in much of England, particularly the south. Scotland also has two regional languages: Scottish Gaelic and Scots. You can learn Scottish Gaelic now with uTalk; watch this space for Scots!

8 thoughts on “10 reasons to visit… Edinburgh”