To finish up our Japanese week, Safia’s written today’s blog post on her top ten reasons to visit Tokyo.

Do you live in Tokyo, or have you visited? Please share your own top tips in the comments!

Before I even start talking about specific points of interest, all you need to do is to walk down the street to see how traditional and modern Japanese culture both collide and sit beautifully side by side. Temples of all shapes and sizes pop up everywhere in between buildings and houses (many of which are open to the public), kimonos and yukatas are still worn as everyday wear and not just for special occasions, and I will never stop being excited about literally being able to buy anything under the sun from a vending machine.

For the weird, the wonderful and the fandom, Harajuku is the place to be to find the centre of Japanese youth and fashion culture. If you like to people-watch, there are usually a handful of cosplayers or colourfully dressed youths hanging around the station area and the backstreets are packed with little independent boutiques. In stark contrast, Meiji Jingu is also located here with the entrance round the corner from the station, and is an Imperial Shrine dedicated to Emperor Meiji and his wife Empress Shoken. If you’re lucky enough you may even get to see a wedding, as it is a popular venue for forthcoming nuptials. 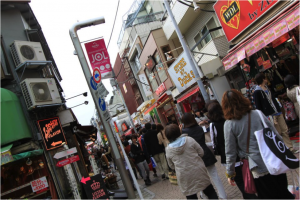 There are very few places in the world where I would consider waking up at 5am just to get some fish, but Tsukiji Market is definitely one of them. If the idea of raw fish (sashimi) sends you heaving, I urge you to give it another go for the love of tuna that just melts on your tongue. I promise when it’s this fresh and prepared this delicately there is nothing else like it, and there will be plenty of other sushi options as well. Personally as a foodie, I skipped straight to the food, but if you want to see the tuna auction you really have to get there early as there are limited spaces for viewers. Some of the queues for the restaurants can get quite long as well, but surely that’s just testament to how good it’s going to be inside?

4. Boat ride on the Sumida River

Take a journey down the river and under its many bridges to see Tokyo from a different point of view. Jump on at Asakusa where most of the water buses start from and you’re guaranteed to see at least twelve different bridges along this route. If architecture and design spark your interest then this is definitely a trip for you. And if sipping a cool beer on a boat on a sunny day sparks your interest then I’d say this is a trip for you too! There are various routes including a round trip, but I can recommend getting off at the Hama-rikyu gardens for an added sightseeing bonus.

When it comes to food, where do I even start? I wouldn’t blame you if the first thing that came to mind was sushi followed swiftly by ramen, but there is so much more to Japanese cuisine. This section deserves its own blog post, but before I get too tempted let me recommend three things that I think you should definitely try on your trip (that doesn’t include sushi or ramen!):

Bearing in mind that’s a literal translation, takoyaki is a batter cooked in a special pan filled with diced octopus, pickled ginger and various other ingredients, all brought together in a handy bite-sized ball.

Quite often this pancake-like dish is cooked on a hot grill right in front of you with the main ingredient being cabbage. Be sure to check if it’s a grill-it-yourself establishment so you’re not sitting there twiddling your thumbs while everyone else is already tucking in!

Basically, meat on a stick (and sometimes vegetables) but with some amazing local flavouring. If you can find it, there’s a brilliant little alleyway in Shinjuku where local eateries are crammed in next to and top of one another.

I can only describe an Izakaya as a cross between a pub and a tapas restaurant in a laid back and cosy setting. Although they can at first seem intimidating to a foreigner, they’re great for unwinding after a long day of sightseeing (or work) and getting acquainted with the locals. If you’re having a tough time looking for one, many still sport a traditional red lantern outside the premises. Food comes as and when ordered and ready rather than in courses and is usually shared between the group if you’re with other people.

Surely it’s not possible to go to the motherland of karaoke without actually going to a karaoke bar at least once? Even if you don’t like karaoke, you’re in another country and no one will ever know, unless you accidently post a picture on Facebook. So lose your inhibitions, grab that mic and belt out some tunes in a foreign language! Japanese karaoke is an altogether individual experience and there are such a variety of bars and boxes to choose from, whether you’d like to be surrounded by Hello Kitty memorabilia or even sing from a hot tub. Check out the Shibuya and Roppongi areas as a starting point.

At a whopping 634m tall, Tokyo Tower is hands down one of the best ways to survey the city. If you need a break from the bustling streets below, I highly recommend popping up and having a little gander. The night time view is spectacular with Tokyo’s array of high rise buildings and bright lights. During the day if you’re lucky enough to have a clear sky, then you may even get to see some distant points of interest which are very handily marked around the tower for you, such as ‘Mt. Fuji, 97km, that way’.

Around April something magical happens in Japan and it’s called Sakura or Cherry Blossom season. As it’s seasonal the exact time of the year can vary, but if you manage to catch it the flurry of pink and white blossoms can be breathtaking. Sakura hot spots in Tokyo include Shinjuku Gyoen and Ueno Park, both boasting over 1,000 Sakura trees. Be prepared for crowds during peak season as popular areas can get amazingly crowded with Sakura enthusiasts. 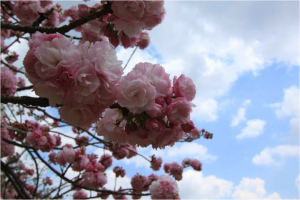 Asakusa definitely has a bit more of an older feel to it compared to some of Tokyo’s other more shiny districts like Ginza. Many of the buildings were built around the 1950s/60s since prior to this most were lost to bombs in war. This included one of Tokyo’s most popular temples Sensou-ji, which was originally built in the 7th century. It was rebuilt after WWII to symbolise peace and rebirth to the Japanese people. To get to the temple you’ll need to navigate your way through the Nakamise shopping street, which is lined with various street food stalls and tourist shops.

One final piece of advice – don’t assume that everyone in Tokyo will speak English, because they don’t! You’ll need to learn at least a few basic phrases before you get there.

Fortunately, there’s an app for that 😉

All photos property of Safia Griffin