8 ways to feel confident about speaking a language

So you’re off on holiday, and you’ve decided you’re going to speak a bit of the local language. You get a EuroTalk program (obviously), start learning a few key phrases, and you’re feeling good.

But then you get off the plane and the doubts start to creep in. What if people laugh at your accent? What if you say what you need to say perfectly, but don’t understand the reply? What if you open your mouth and instantly forget everything you’ve learnt?! Probably safer to stick to English, or sign language. Right?

It is scary starting to speak another language. I get incredibly nervous – more so, ironically, with Spanish, which is a language I studied for years but haven’t spoken properly for a while. But sometimes you just have to throw yourself into it and see what happens. The worst that’s going to happen is that you don’t understand each other, but the reality is nobody’s going to laugh at you for trying to speak their language, or blame you if you make a mistake.

Now, obviously I realise ‘just throw yourself into it’ is a lot easier said than done. So here are some tips to help your confidence, before and during your conversation.

Bit of an obvious one, but you should try and learn at least a few words, so that you’re not going in to the conversation completely unprepared. At least that way you start off in control. It’s probably a good idea to learn how to say  ‘I don’t understand’ and ‘please speak more slowly’ as well; at least that way if you do get stuck you’ll be able to do something other than stare blankly.

Find a language partner to chat to before you go

Learning on the computer or your phone is great for learning vocabulary and perfecting your accent, but at the end of the day, learning a language is obviously about conversation. If you’ve got a friend who speaks the language you’re learning, or is learning as well, set aside some time regularly to chat with them. It’ll be easier with someone you know and feel comfortable with than with a stranger, as you won’t be so worried about making mistakes.

Take uTalk with you

Because if your mind goes blank, you can grab your phone and search for the word you need in seconds. uTalk is much quicker (and better-looking) than a phrasebook, and it tells you how to say the word as well. Bonus.

Ban yourself from speaking your own language

I recently discovered Scott Young’s blog; he and a friend just spent a year travelling around four different countries, attempting to speak no English and immerse themselves completely in the local language and culture. This might seem quite drastic, but I can’t think of a better way to feel confident quickly – given a choice between speaking to people in another language or not speaking to anyone at all for three months, I know which one I’d choose.

Try thinking in the language

I’ve tried this approach before in Spanish and found it quite effective. When you look around your house, try and think what the objects are called in the language you’re learning, rather than English. (FlashSticks are useful for this sort of thing.) Try and think about a TV show you just watched, and explain it to yourself in the other language. Go outside and try to name as many everyday sights as you can. This way, it starts to feel like second nature and you may be surprised to find yourself doing it without trying.

Have you ever had a conversation in another language? Remember how good you felt afterwards, when you were holding the train ticket you’d just bought, or eating the meal you’d just ordered? Any time you feel hesitant about starting a conversation, focus on that feeling and push on through. It’ll be worth it.

Make a phone call (a.k.a. jump in the deep end)

When I was at university, I spent my third year living in Madrid, and during my first few days I had to make lots of phone calls to try and find somewhere to live. And it was terrifying. I’m not really a fan of the phone at the best of times, but making calls in another language was twice as scary – without the aid of body language or facial expressions, it suddenly becomes a lot harder to understand what someone’s saying to you. But I did it, because I had to, and managed to successfully arrange several viewings; I’d never have thought I could do that before I left home.

And, if all else fails…

It’s a well-documented fact – mostly among students, for some reason – that having a drink or two actually improves your language skills. While that may not be entirely true, it does make sense that when you’re feeling relaxed, and your inhibitions are lowered, you’re going to feel more confident about giving it a go. Don’t have too many drinks though, obviously, or then nobody will understand you in any language. 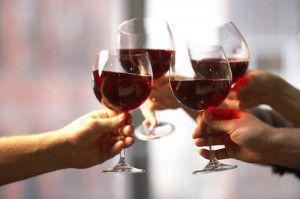 Do you struggle with confidence when you’re speaking another language? How do you deal with it?