As marketing manager here at EuroTalk, it’s my job to tell everyone how great our products are. But from time to time, I need to use them for myself and I get reminded all over again just how useful they are. 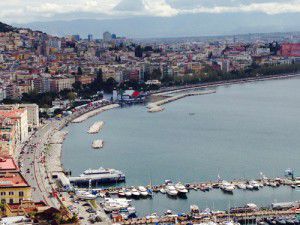 Last weekend I spent a few days in Naples, Italy. I was determined before I left to try and speak a little bit of Italian; after all I spend most of my time telling other people they have to speak the local language, not to mention it just seemed like the polite thing to do. As it turned out, it was also quite necessary because to our surprise, although it’s a pretty touristy area, not many people spoke English. Fortunately I’d come prepared with uTalk on my phone, and it turned out to be invaluable.

I left home with no Italian at all, apart from the basics – ‘ciao’, ‘grazie’ and ‘per favore’ were the first words I tried out (all included in the free version of the app). I’d also learnt the numbers up to three in advance, so I could ask for a table in restaurants. Pretty soon I realised I also needed to know ‘una bottiglia d’acqua’ because it was quite hot and sunny (when it wasn’t pouring with rain), and some higher numbers so I knew how much money I was being asked for. So out came uTalk for a quick revision session.

The first time we went to a restaurant, the waiter spoke some English and somehow identified us as Brits the moment we walked in, so my contribution was fairly limited, although I was insistent that I wanted to say what I could in Italian. The following night, I managed to ask for the bill, thanks to a quick check of my phone. And by the last night, I was able to order dessert by describing what I wanted (‘una torta de fragole’) and was astonished and delighted when the waiter brought me exactly what I wanted without any confusion. (We also got free limoncello at that restaurant – although I think they might have given that to everyone.)

Our main challenge in Naples was figuring out the ‘funicolare’ – which, by the way, is the weirdest way I’ve ever travelled. (For those who aren’t familiar, it’s basically a little train/car that carries people up and down the mountain – but on the inside and at a 45 degree angle. It’s quite surreal.) I’ll admit there was a bit of English used when I asked the man in the station how it all worked the first time, but then after another quick check of uTalk, I managed to buy us three tickets (‘bigliettos’) from the slightly intimidating lady in the little shop next door.

None of my conversations were particularly long or profound, but every time I said something in Italian and the person I was speaking to understood me, I gained a little bit of confidence. By the time I left, I was quite looking forward to these little exchanges, and was a bit disappointed if someone talked to me in English. There were a lot of Brits around, as we were all there for the Davis Cup tennis (the less said about that the better) and we witnessed a few fellow tourists adopting the ‘talk louder in English’ approach, not to mention quite a lot more standing around looking very confused in the funicolare station. So it was quite satisfying to know that we’d made the effort; the locals I spoke to certainly seemed to appreciate it. And yes, there were a couple of occasions when they thought I knew more than I did and started chatting away in rapid Italian, but somehow I managed to fumble my way through it (‘non capisco’ – I don’t understand – is another important phrase to learn).

It’s always useful to learn a few words before you leave for your holiday, but for me the most useful thing about uTalk was that I always had access to the vocabulary – written and spoken – whenever I needed it. I wouldn’t necessarily have thought to look up ‘strawberries’ and ‘cake’ before I left, for example, so without uTalk I might have missed out on this amazing dessert. And that would have been a tragedy. 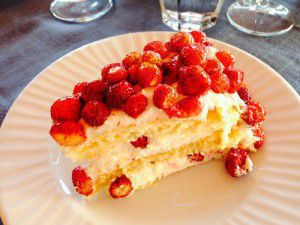 2 thoughts on “A little language goes a long way”