A recent poll has found that only one in ten British travellers learn any of the language before they visit another country. Some claimed this was because English is now so widely spoken, while others blamed shyness and a fear of saying the wrong thing.

I understand the second excuse much more than the first. Just because we can get away with speaking English doesn’t mean we should. Learning just a few words can make a huge difference, not only to those you’re speaking to but to your own holiday experience. And you don’t have to learn anything complicated. Five per cent of people surveyed said they just learnt the absolute basics, like hello, please, thank you, water and beer. Sometimes all it takes is a friendly greeting in someone’s native language, and they see you in a whole new way – as someone who respects their culture and has made an effort, however small. And that will come across in the way they treat you, making your time in the country a lot more fun. Not only that but you’ll feel pretty good about yourself – I remember several years ago on a school trip to Spain, a friend of mine ordered an ice cream in Spanish. An ice cream – it was as simple as that. But she was so proud of herself when the vendor understood her and she completed the purchase in a language not her own. 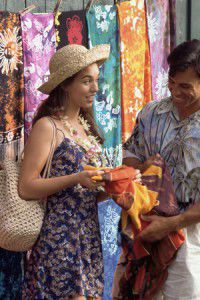 Benny Lewis, who’s known as the Irish polyglot, has spent nine years travelling in different countries, learning languages as he goes. Every few months he announces a new challenge, learns some vocabulary and then – he just goes to the country and starts talking. He doesn’t worry about making mistakes or getting his grammar slightly wrong.

Obviously we’re not all as brave as Benny. I’m certainly not. But there does come a point when you have to stop being scared and just take a risk. People are not going to point and laugh if you don’t pronounce something quite right. As a general rule they’ll be so pleased to hear you trying to speak their language that they won’t mind at all, and will probably go out of their way to help you get it right next time.

So let’s be brave! Next time you go on holiday try learning a few basics before you go, and see what a difference it makes…