As you’ll know if you saw my earlier post about Italian habits, I have just come back from living in Rome for four months as part of a compulsory year abroad for my university degree (a.k.a. second gap year). Before departing for adventure no.2 of the year, I was excited to see old stuff, learn some crazy hand gestures, and most importantly, eat well. I soon realised that all of the items on my checklist would be fulfilled the moment I set foot out of my front door every single day of my stay.

As ‘old stuff’ goes, I’d say my favourite has to be the Column of Marcus Aurelius at Piazza Colonna, which stands part way down the Via del Corso that runs from Piazza del Popolo to Piazza Venezia and the gigantic Vittoriano monument. The column towers majestically above shoppers and tourists, who hardly stop to marvel at the intricate story told by the ascending marble figures.

After only a short while in Rome, I came to the realisation that it is in fact impossible to express oneself without one’s hands. Well, express oneself properly anyway. No ‘ma che?’ (an expression of confusion/outrage/misunderstanding/shock) goes without a frown and a double-handed finger-grouped wrist shake, and joy does not exist without at least one arm raised in the air for celebration. These are a passionate people, and they aren’t shy of showing you exactly how they feel.

Now food. I honestly can’t express how much I miss fairly-priced, handmade, loaded plates of pasta, and pizza by the rectangular slice topped with every cut of ham and cheese under the sun. However, it is with gelato that my heart lies, and it’s yearned for it ever since my return. For 18 weeks I undertook an Instagram project entitled #giovedìgelato, trying out new flavours, gelaterie, and selfie angles every Thursday. And it is with you that I would like to share my top three gelaterie in Rome (and the flavours I chose when I was there).

I must have been to this gelateria every week I had guests, or if one of my friends had guests, or if I was passing by on my way home, or if it was hot… any excuse really. They offer you white or dark melted chocolate in the bottom of your cone that comes from a free flowing tap, and a choice of four flavours of cream on top of your piled-high gelato. Flavours include ‘biscotto della nonna’, ‘crema dal 1947’ and ‘zabaione come una volta’, inviting you – and all the other 30 people in the queue – to taste the family history of the place. All this for only €2.50. Why did I ever leave?

My #giovedìgelato flavours: ricotta with caramelised figs, yogurt with honey and hazelnut, dark gianduja chocolate in the bottom of the cone, and zabaione cream on top. 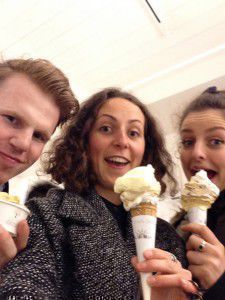 There are several Fatamorgana around the city, but I like this one by Villa Ada in particular, because it makes the journey into a pilgrimage, and the gelato just that little bit more well-deserved. Every time I went (again, it was a relatively frequent occurrence), there were hoards of children with mothers, fathers and grandparents, clambering over each other in an orderly Italian fashion, somewhere between patient and not so, waiting for their number to be called. With over 70 different flavours, I was secretly pleased I had a little while to wait, otherwise I’d never have been able to make a decision: wasabi chocolate, rice and vanilla, and all of the traditional favourites in between. There’s even a sweet little park just opposite where you can enjoy your exotic choices!

My #giovedìgelato flavours: blackberry, ginger with honey and lemon, and three-spiced chocolate chip. No cream this time. 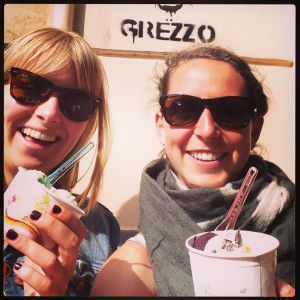 This little gem is just round the corner from La Romana, and although not quite as busy, it is equally worth a visit. Instead of chocolate in the cone, they dip a decorative waffle in it, so that the chocolate dribbles over your gelato. The choice of flavours is not extensive, but changes with availability of ingredients, which adds an element of excitement to the experience (if it isn’t your first time), and underlines their artisan quality.

My #giovedìgelato flavours: melon, salted caramel with Himalayan rose, and a waffle dipped in dark chocolate. 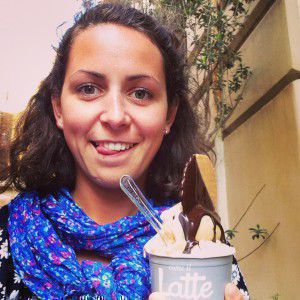 These gelaterie are all slightly out of town, away from the hustle and bustle of the tourist centres. For more central options try: