Here at EuroTalk, we love learning languages, and between us we speak quite a range, including Spanish, Hungarian, Russian, Japanese, German, Portuguese, Latvian, Slovak and more. But one language that the Brits in the office tend to forget about is our own – English. 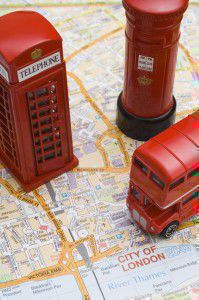 Recently, we’ve had several conversations about the English language, usually inspired by one of our colleagues from overseas asking us what we mean when we use a particular word or phrase. Then Ioana found this article about British slang phrases and wanted to know how many of the listed expressions we use on a regular basis (quite a few, actually).

We thought this might make quite a fun blog post, so here are just a few of the English words our colleagues have discovered since arriving in the UK, along with others that we Brits feel everyone should know…

Discovered by Richard and Pablo

A pantomime (or ‘panto’ for short) is a very British tradition; it’s a musical comedy play performed each year over the Christmas and New Year period. Each town has its own panto, which is usually based on a children’s story and features certain conventions, including the pantomime dame and audience participation (‘he’s behind you!’ etc). It’s something that anyone who’s grown up in Britain tends to take for granted, and is surprisingly hard to describe, as we discovered earlier this week when the guys said, ‘What’s a pantomime…?’

Toad in the hole

A traditional British dish, consisting of sausages baked in Yorkshire pudding batter. Tastier than it sounds – and there are no toads in it, so we’re not quite sure how it got its name.

We think this might actually originate from the USA, but put simply, a food baby is when you’ve eaten so much that you look a bit like you might be expecting. It’s also Ioana’s new favourite expression.

This is basically an affectionate way of calling someone an idiot. If you hear someone say, ‘No, you numpty!’ it means you’ve got something wrong, but don’t be too offended – there are far worse things they could call you. (Another version of this is calling someone a muppet.)

If someone’s in the doghouse, it means they’re in trouble, just like a dog that’s been kicked out of the house and made to sleep outside.

Confusingly, this has nothing to do with speaking other languages. In fact, it’s a way of apologising for swearing, in an attempt to pretend the rude words are a foreign language, even though everyone knows they aren’t. It’s thought the expression originates from the 19th century, when people actually did apologise for using French words, assuming that whoever they were talking to didn’t understand.

This one derives from Shakespeare’s The Tempest, and means to be in a tricky situation or ‘a spot of bother’ (another English phrase for you, there).

Sniggering is laughing – but not in a nice way. A snigger is a quiet laugh, often under your breath or behind a hand, at the expense of someone else. We don’t recommend it; it’s mean.

Not to be confused with ‘botch’, which means to do something very badly, to ‘bodge’ something is to fix or build something temporarily, using whatever materials you happen to have lying around. The result may not look great, but it isn’t necessarily bad – in fact a bodge job is usually a sign of resourcefulness.

Does anyone else have any great English words you think everyone should know? Or have you learnt a fun English expression you’d like to share? Let us know in the comments 🙂