‘Footballers are a bit dumb.’ This is a general assumption that has existed for as long as I can remember. It also makes it a little easier when you think about the vast sums of money that most get paid. However, what would happen if they suddenly stopped receiving these large weekly amounts? This may sound a little bit of an irrelevant question but this is exactly what happened to many footballers on the continent earlier this year. With arguments about television rights in Spain many of the smaller clubs from La Liga (Spain’s equivalent to the English Premier League) owed players over three month in wages. It would have been a stark realisation for many of these young players that it did not matter if you earned €100,000 a week or €100, rent and mortgages still need to be paid on time, whether you are a footballer or not.

In this case a players’ strike at the start of the season garnered support and action for many of the affected footballers. It got me thinking however, what other attributes do these players have to use in the ‘real’ world? Could a job in languages be a realistic goal? 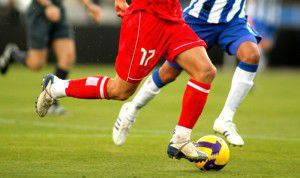 If you take the Premier League for instance, there are 72 different nations represented. Now remove Britain, Ireland, America and a couple of other Commonwealth countries; that leaves representatives from 64 separate countries without English as their first language. Considering that the vast majority are now bilingual this is already an impressive item to add to their CV, but if you look at a select few they could shine in a multilingual environment:

The most I can seem to find, however, goes to our local Fulham centre back and Swiss international Philippe Senderos, who speaks six languages (English, French, Spanish, German, Italian and Portuguese), a total that many professional linguists would struggle to contend with.

The variety of languages in the English League alone can lead to problems within teams and especially within management. Chelsea is a prime example where language skills have come to the forefront of the players’ regime. With a multitude of spoken languages, the first ruling of Andre Villas Boas (the current Chelsea manager) was to state that only English was to be spoken at the club, to bring a common language to the players who would otherwise separate into groups based on their mother tongue.

With Villas speaking four languages himself, it has become an integral part of his management style. New Spanish signing Juan Mata stated that understanding the instructions in English is challenging to begin with, but the squad helps out any new team mates who are struggling. With personal problems, however, Mata says that the manager would take him to one side and have any personal conversations in Spanish to allow him to fully express himself; this demonstrates the diversity an extra language can give, especially in management roles.

There is one English based Chelsea induction that the Spaniard could not escape – the tradition of Chelsea’s karaoke initiation, where a song has to be sung in English in front of the entire squad. Mata’s choice? The Macarena… It seems that although we may not be able to write off footballers as talentless off the pitch, due to the language skills that many have learned, we may be able to continue with the assumption that they have some terrible taste.

5 thoughts on “The Footballer’s Hidden Skills”