I must admit that Algeria does not feature highly among people’s bucket list destinations.

While most tourists visiting the region flock to Egypt or Tunisia, Algeria is still very much off the beaten track. Nor does it help that it  has attracted a rather bad press over the last year or so:  much of the country is a security risk and the FCO advises against all travel to half of the Algeria, and all but essential travel to much of the rest.

Chickened out? Well, there is always its next door neighbour Morocco, which admittedly has done much to develop its tourist industry over the years.

‘Ah but I’ve been there already’, you say, ‘I’ve stayed in a posh riad, I’ve had a ride on a camel and I’ve stocked up on more of those pointy slippers than I’ll ever need.’

Quite. So you’re looking for the real deal, are you? Well, the good news is that Algiers, the capital, is very much worth the detour, untouched by Easyjet, and better still, firmly in the ‘OK to visit, but be careful’ bit of the country. I was lucky enough to go twice, and here I am writing this: all bodily parts present and correct, wallet intact, and dignity unscathed.

As it happens, I was working on a project with one of the government ministries. This meant that I was fortunate enough to be met at the airport and whisked through immigration and customs in seconds. I also benefited from a security detail which picked me up and accompanied me wherever I went: a pair of friendly enough goons, wearing shades and Blues Brothers suits (sans hats), constantly tailing us in a slightly scruffy VW Polo – not a Bluesmobile.

So here are my ten reasons to visit Algiers (and a bit of the surrounding area):

Algiers has a faded, run down beauty. The centre of the city is full of white stuccoed buildings in the French colonial style and you’ll love exploring the up-and-down streets and avenues. Pack a pair of stout walking shoes though, as it’s a hilly place.  And as you take a break, sipping a coffee and people watching at one of the many excellent cafes dotted around town, you may be wondering where all the tourists have gone.  Don’t worry: the last ones left circa 1962, so you really will have the place to yourself. 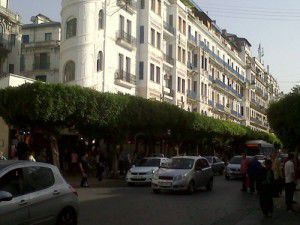 You may find yourself in accommodation  higher up and somewhat away from the city centre, with the city stretching out below you. Not for nothing is the city called ‘Alger la Blanche’.

I found a little cable car that takes you down the hill (i.e. from the residential suburbs to the city centre) to the sea and Botanic Garden in just three minutes. There’s also a one-line metro that crosses the city, which, when I used it, was virtually empty. I wondered whether people had in fact been told it had recently opened – or maybe they simply refused to pay the 15p fare.

Petrol in Algiers costs only around 10p per litre. No, this is not a misprint for 110p. Algeria is, after all, still one of the world’s leading oil producers.

Should you require a fix from KFC, McDonalds, Zara, or any other global retailer for that matter, please leave Algiers immediately. To remind you, this is not Morocco. However, with your 4 X 4 filled up with 10p petrol you could probably drive there.

If you enjoy your French food, you might like Algiers’ version of it. The seafood is excellent, especially when washed down with a glass of Oran wine, which is not bad at all. Alternatively, if you enjoy your coucous you’ll love the Algerian varieties. Do not expect Michelin star joints: most eateries are small and family run.

By the way, you will need to hone either your French or Arabic speaking skills when you negotiate your way around town, as very few people speak English. I strongly suggest a purchase of uTalk prior to departure.

Do you have a sweet tooth? There are countless well stocked patisseries wherever you look, with everything from tiny sugar dusted and intricately decorated almondy cakes to classic croissants on display.

The botanical garden, Le Jardin d’Essais du Hamma, is lovely: classically designed, it is formal, tropical and a respite from the heat, especially if you’re visiting during the summer. 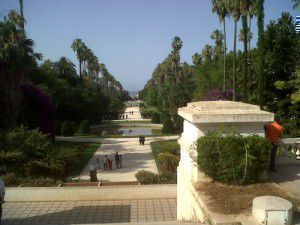 One day we were taken along the coast to the sleepy little seaside  town of Tipasa, which goes back 2,000 years, and where it is possible to visit the remains of the Roman city. In fact Tipasa became one of the most important ports in Ancient Rome.

If you are determined to venture high enough in the city you’ll find Notre Dame d’Afrique, a 19th century Catholic church, which is an official monument and commands views of the Bay of Algiers and the harbour. Its architecture is fascinating: a successful blend of Eastern and Western influences.

I can’t end my snapshot of Algiers without a quote from one of its best known sons. In his 1936 essay, ‘A Summer in Algiers,’ Albert Camus wrote: ‘In Algiers one loves the ordinary places: the sea at the end of every street, a certain volume of sunlight…’ What more can you ask for?