As part of our non-stop quest to bring you an insiders’ guide to the cultural and linguistic highlights of Europe and beyond, here are my top ten reasons why you should visit Amsterdam.

Of course I knew that Amsterdam was famous for its canals, but I didn’t realise that they’re everywhere. This can make getting around a little confusing as everything sort of looks the same (especially if you indulge in some of Amsterdam’s other famous pastimes – see later!) but it gives the city a unique and beautiful atmosphere, and means you’re never short of somewhere relaxing to sit and enjoy a rest and a beer. Nat suggests renting a pedalo, or you can also take a cruise around the canals for about 15 euro. 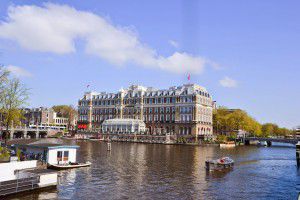 This is one of Amsterdam’s most famous and most unique tourist sites. Whatever your opinion is on women being displayed for sale in windows, it’s something you won’t see anywhere else, and the district is definitely worth a peek. Just remember – pictures are strictly forbidden, and your camera will be confiscated if you don’t keep it stowed away.

If you don’t know what Amsterdam’s coffeeshops are known for, then let me give you a hint… it’s not coffee! Since marijuana is legal in Holland, many tourists flock to Amsterdam to smoke a joint or two in one of the city’s many coffeeshops. These are literally everywhere, especially in the city centre and near to the Red Light District, and are always packed with people sitting outside and enjoying a smoke. You’ll probably notice the distinctive smell everywhere. By the way, there are also plenty of great places to drink actual coffee as well!

There are a couple of main squares in Amsterdam, which are all packed with cafes, restaurants and bars, but Dam is the biggest and most iconic. During our trip there was a funfair going on there, and it’s definitely one of the more lively parts of the city, packed with people. By night, all the restaurants and bars around this area are busy, and sitting outside is a great way to people-watch and experience the Amsterdam nightlife. Be sure to also check out Rembrandtplein – where you can easily grab a table outside to eat dinner or have a drink, and Museumplein, where all the biggest museums (and the famous Amsterdam sign) are. 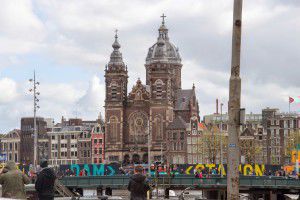 If you’re anything like me, then you probably don’t instantly associate the Netherlands with great cuisine, but actually you’d be wrong! Amsterdam has plenty of good international restaurants, but is particularly good for Indonesian cuisine due to the country’s links with its former colony. We also found a fantastic Dutch restaurant in the centre, where I tried the traditional dish Hotchpotch, which is basically a combination of mashed potato and vegetables, served with bacon or meatballs, which was really tasty and filling. Make sure you also order a pint of Heineken (brewed in the city) and try some traditional apple cake or poffertjes (small pancakes), which are really popular.

Technically this should probably come under ‘Dutch cuisine’, but I think it deserves a point all of its own. Herring is a very traditional food in the Netherlands, as in much of Northern Europe and can be bought from various stalls in the city. Try it with pickles and chopped onion in a roll for a tasty, cheap and portable lunch while you’re sightseeing!

7. Try out a few phrases in Dutch!

The stereotype that Dutch people are ridiculously good at English is true, so don’t worry if you don’t speak any Dutch; you can definitely get around and order food in English. However, people are generally friendly and happy to let you try out a couple of phrases on them. We got chatting to some locals in a club, and they were happy to teach us some basic words, although their English was completely fluent. Dutch people seem to be very open to chatting with foreigners in English (more so than elsewhere) and it’s an easy place to make some new friends.

Don’t forget to bring uTalk with you, even if you only use it to decipher what’s on menus!

There’s plenty to check out on the cultural side too. The Van Gogh museum has permanent queues in front of it, to see some beautiful paintings by the most famous Dutch artist of all time – even if he wasn’t well known at all in his lifetime. We visited the Rijksmuseum nearby, which has some paintings by Van Gogh and fellow Dutch artist Rembrandt, as well as many other exhibits. However make sure you leave plenty of time to see everything – as it’s huge and takes at least 3-4 hours to explore everything. Michal recommends the children’s science museum, and the Museum of Sex also sounds intriguing… 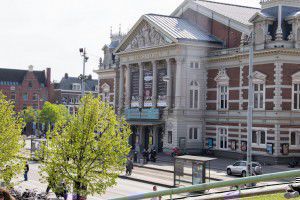 Well, this one is rather weather-dependent, but the weather was great over the Easter weekend, and a stroll around one of the parks was definitely in order. The Vondelpark is quite central and really big – great for a run or a walk. We also sunbathed for a few hours in the Osterpark (a bit further out) where you can easily while away a sunny afternoon.

Finally, the other big thing the city is famous for: bikes. The first thing everyone said to me before I went to Amsterdam was ‘watch out for the bikes’ and they weren’t wrong. It seems like absolutely everyone cycles everywhere, which means it’s a very clean city and the air quality is good. It’s also a very healthy way to get around. Renting a bike is an ideal way to see the city. You can walk just about anywhere, or there are trams and even a (small) metro network, but cycling is probably the quickest and easiest way to zip around the main sights and get from one side of the city to the other. Even cycling home from a night out seems to be the norm.

So there you have it… Everyone in the office seems to have a lot of opinions on what the best things to see and do are, so let us know what we’ve missed in the comments!

2 thoughts on “10 reasons to visit… Amsterdam”