Have you ever visited a city that managed to change your mind?

I visited Bruges earlier this year. Unfortunately, I’d accidentally timed my visit to coincide with the enthusiastically named ‘Amateur Arts Festival’, and consequently spent Saturday night with tissues rammed in my ears and arms clenching pillows to my head, as my hotel room shook with the relentless noise of amateur bass. I thought then that the chances of coming up with ten reasons to visit Bruges were pretty slim. Yet on Sunday morning, with the loudspeakers in the square finally silenced and the sun out, I became enchanted with this town that everyone always refers to as a peaceful haven of canals. These are the things which managed to turn my opinion around in the space of just one morning.

I get a bit excited about foreign trains, I know, but going to Bruges presented me with a new wonder: the double decker train. True, this is not localised to Bruges alone but most of the IC trains from Bruxelles seemed to be two storeys high, giving a fantastic view of the very flat countryside (and occasional windmill!) from the top deck. The trains are smooth and cool, and the conductors wear an amusing flat cap as part of their uniform. If you’re just planning a short visit to Bruges, you can get the Eurostar to Brussels and travel on from there (it’s about an hour on the fast train, two hours on the slow train).

I wouldn’t say the town is riddled with canals in the same way Venice or Amsterdam are, but they linger in the backstreets and circle the centre so that you stumble across them when you wander off the main street. Surprisingly, there didn’t seem to be any locals drifting around on pleasure boats, although there were a few promising houses whose main doors seemed to lead out directly onto the canal. Activity on the waterways instead seemed to be wholly dominated by the tour boats, taking cargoes of visitors on half hour drives up and down the canal, streaming off fluent speeches in three languages as they went. If you’re only there for a short time, I’d advise a boat trip to get your bearings on the town, and to see some impressive buildings from otherwise undiscovered angles.

Belgium is world-famous for chocolate and there are lots of chances to sample it in Bruges. Having been there just after Easter, lots of independent chocolate shops were still displaying elaborate chocolate rabbits and chicken-shaped Easter eggs, as well as the usual array of picturesque truffles and pralines. It being the weekend, there didn’t seem to be anyone around making the chocolates, which was a pity, but I imagine that in the week you’d get a good look at the chocolatiers at work. I was particularly impressed with a small boutique called Stef’s, which sold chocolate tools dusted with cocoa to make them look rusty – I was entirely taken in until I decided it was highly unlikely that a food shop would fill its window with rusty tools. 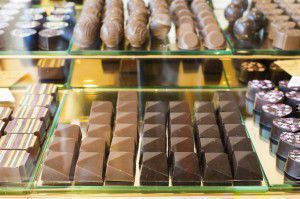 Bruges, although it also has lots of famous sights, is perfect for the lazier tourist who just wants to meander and drink in the tranquil beauty. Cobbled streets with broad flat pavements and gentle bridges over canals provide a little haven to lose yourself in, and since the whole town is very small you soon enough stumble upon some familiar street or building to set you back on route. Horse drawn carriages trot past every so often, carrying bands of eager-eyed tourists, A particularly pretty walk turned out to be the wide promenade from the station into town (a very short stroll and definitely not worth getting the bus unless you have heavy luggage), which passes a beautiful pink-flowered war memorial and glides into the centre of town and some pretty little cafés.

The typical Flemish façade presides here, and people seem to take enormous pride in their property, keeping every gate neatly painted and every tile in place. With a maximum height of 30m for any building in the city, the scenery is all low-lying and the views from any high points are panoramic. Some interesting and very modern architecture brings a new sense of style to the traditional steep-roofed old houses. 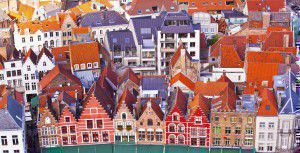 At one point home to over 50 breweries, Bruges now has only one active one, De Halve Maan brewery, which runs daily tours around its compact factory in the heart of the city. The tour, in Dutch, French and English, is definitely worth going on as it is stuffed full of information and lots of insights into why beer is healthy (an argument I always like to hear). They’ll also tell you that back in the ’50s the breweries would do home deliveries – you just had to ring a bell for the cart to stop and dispense beer to you directly. I imagine it’s no longer feasible to re-introduce this practice, but we can always dream… Having climbed right to the top of the factory and experienced the lovely view, you are released at ground level to claim your free beer in the spacious bar-restaurant, where one beer can easily turn into a happy afternoon sampling all the brewery’s many offerings.

I’ve seen these around a little more recently – the free foot-operated bicycle pump – and I’m always impressed with a town that spends its money on something as practical and helpful as this.

and cake. This doesn’t need much explanation really: in Bruges, you can sit at a table on a cobbled pavement outside a bakery with exquisitely executed cakes and sip a small cup of intense black coffee. Although waffles seem to be the thing to have in Belgium, my favourite snack is the florentine – not a native Belgian sweet but nonetheless available in every cake shop.

Almost as attractive as the idea of sitting in a bar all day trying all the different beers is the idea of trying out all the different glasses. That may sound geeky but there are some really fun ones, including the absurd Kwak beer glass whose bulbous end makes it impossible to put down without the proper stand, and the La Corne drinking horn (which you can clink with a fellow Viking over a drinking toast and which, again, cannot be propped up except with the stand it comes served in). Good bartenders, the Belgians will tell you, will never serve a beer in the wrong glass, and each beer has its own glass, most of which are shaped like a chalice or a tulip. 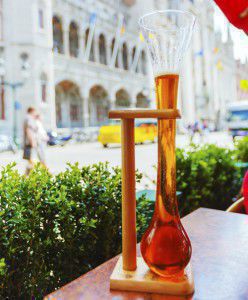 If this is what you’re after, you won’t be disappointed in Bruges. With a long, meandering high street full of clothes and chocolate shops, as well as a large market and side streets offering endless souvenirs, you could spend a day just in the shops. And if you’re looking for a bigger centre, Brussels is only an hour or so away by train, and Ghent is neatly stuffed in between the two, to make a weekend of it.

Have you been to Bruges? What were your highlights?