A couple of months ago, I spent a few days in the Ukrainian city of Kiev, which turned out to be a fascinating and occasionally surprising place to visit. So here, in no particular order, are my top ten reasons to go and check it out for yourself.

Probably one of the highlights of spending five days in Kiev was figuring out how much we’d just paid for each meal, trip etc… After eating a ridiculously large lunch at the fantastic Vagon, including drinks, appetisers and dessert, we realised it only cost £15 for two people. And even better, you can ride the Metro for about 10p (regardless of distance), take buses all over the city for 10p and ride the Funicular for about 20p. Taxis tend to charge you a flat, tourist rate of 100 hyrynas, which is still only around £5 to get from the airport to the city.

2. Chill out on the beach

Yep, there’s a beach. If you cross the bridge to the other side of the river, there’s a proper sandy beach where locals go to soak up the (surprisingly hot) sun. You can abseil from the top of the hill down to the beach, bungee jump from the bridge, swim in the river, or just sunbathe and eat ice creams that cost you less than 50p. 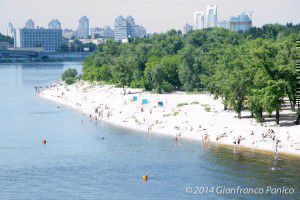 Ukrainians seem to like to party, with lots of booze and dancing! Coyote Ugly is a favourite spot where you can smoke shisha, drink vodka shots, dance on the bar, and still come away with change from £20. However, be warned that if you ask for water in a British accent, you’re likely to come away with yet another (unwanted) shot of vodka! Apparently Arena City (quite central) is also worth a look with several different bars and outdoor seating areas.

Maidan is the city’s central square and home to some of the most recognisable statues and monuments. During our visit, it was also home to numerous barricades – many built from rubble, rubbish, tyres and whatever else was to hand. There were also many burned-out cars and even buildings which had been burned out by the police during the recent conflict. People had even pulled up the cobblestones from the ground and used them to throw during the riots. Here and in Khreschatik street you’ll also find lots of memorials to people who died during the revolution.

5. Take a trip to the world’s most famous nuclear disaster site

Admittedly this might not be on every tourist’s to-do list, but it certainly was on mine! You can take a day-trip to Chernobyl for around £100 per person, which includes an extremely well-organised bus trip to the town, lunch, fully-guided tour by really excellent guides and the amazing opportunity to take pictures by the reactor and in the deserted town of Pripyat, with its famous funfair, which was never opened to the citizens of the town before it was evacuated in 1986. 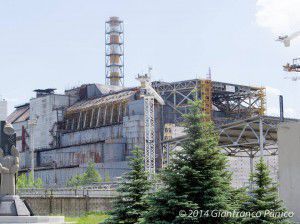 I don’t know if this place is particularly famous, but it should be, for its awesome brunches with eggs, pancakes, cake and whatever else, plus juice and coffee for less than £15 for two people. Also try Vagon for its fantastic tagines, Varenichnaya for Ukrainian specialities (Vareniky are ravioli-esque dumplings) or Puzata Hata, which is a cafeteria-style chain that sells Ukrainian food by weight.

7. Take the Funicular up the hill

If you read Liz’s post a few months ago about her trip to Naples, you’ll remember she had a trip up the hill on the ‘funicolare’. Well this is pretty much the same thing… A carriage which takes you up the side of the hill for the eye-watering price of 20p. When you’re at the top, you can enjoy an amazing view of the city and river, as well as the park (albeit with very spiky grass) and one of the more surreal monuments – the archway representing friendship between Russia and Ukraine… The less said about that the better, maybe. Try a Kvas which is a really, really strange drink – something like a very sweet, non-alcoholic beer.

This is a covered market just off Khreshatyk (the main street) and is a great place to wander around and see a range of really great quality fruit, caviar, salami, cheese and lard (which is strangely popular here…).  Just be aware that the vendors will do the hard-sell on you even if you don’t speak Russian. We walked through with no intention of buying anything and came away with a jar of caviar and a block of cheese without even realising what was happening!

This landmark translates as something like the Monastery of the Caves, and is a particularly unique site, where you can spend at least a whole afternoon. It’s a complex of various different churches, as well as the crypts below where you can see the mummified bodies of saints by candlelight. The architecture here is particularly spectacular, with a myriad of golden domes, not to mention a great view of the city. 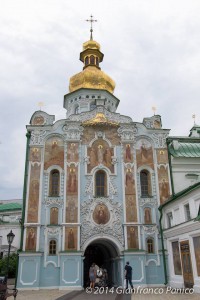 10. Sightseeing all the monuments around the city

There are loads of different statues and buildings around the city that are worth seeing. Climb the hill to see the St Andrew Church (and an amazing view), visit the St Sophia Cathedral (one of the Seven Wonders of Ukraine, apparently) and several other cathedrals, churches and more…

Don’t forget to download our free app, uTalk, and learn the basics in Russian or Ukrainian (or both!) before you leave – not many people in Kiev speak English, so you may find knowing a few words can make a huge difference.

And if anyone has any other tips or reasons to visit Kiev, please let us know in the comments!

Alex (with thanks to Gianfranco for the photos)