Today, we’re going to Russia. At least in spirit. Here are my top ten reasons for visiting Russia – and, trust me, it’s been hard narrowing it down to ten!

Travelling by train is arguably the best thing you can do in Russia, so try to leap on one as soon as you arrive. Everything about it is an experience, especially if you’re used to the slender commuter trains of the UK. In Russia, trains are absolutely vast, and appear even more so since you have to climb up into them from ground level. They are slow and ponderous, stopping for twenty minutes or so at each station (enough time for you to get out, stretch your legs and if you’re lucky buy a smoked fish from a vendor on the street) and crawling in between.

Inside, a strange etiquette reigns, so that on the plus side you might be invited to share food and drink with your neighbour, and on the minus side you will be obliged to give up your ground level bunk to anyone older than you who only managed to secure a second tier berth. Presiding over the whole show is the train assistant, who will sell you bed linen and glasses to make tea from the great water boiler at the end of the carriage, and as a special bonus will shake you vigorously by the foot to wake you before your stop.

The Hermitage, obviously. You could easily spend a day wandering around it, drinking in all the extravagant beauty. In fact all of Petersburg is nice for walking around dreamily, looking into little museums and palaces and drinking coffee on Nevsky Prospekt. 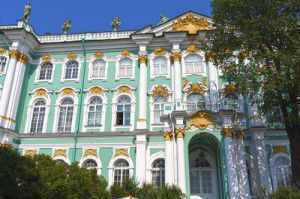 Tricky condensing this into one paragraph, but I think the best things to do in Moscow are to get the metro (looking at the sumptuously decorated stations along the way) to Sparrow Hills and there look at the view, then go out to the Novodevichy Cemetery where you’ll find various big names, including Shostakovich, Bulgakov and Mayakovsky. This cemetery shows enormous wealth and the desire to show it off after death, so look out for any especially showy tombstones. Then, of course, Red Square and the Kremlin are worth a good long visit, as well as Lenin’s Mausoleum, if you don’t mind being marched past the body at a fair lick and glowered at by armed guards from every corner within.

Although Russians often seem to have a reputation for being a bit moody when you first meet them (especially if you meet them on the street or in a public place, where it is a little frowned upon to show excessive emotion), you can very quickly make solid friends for life in Russia. Advice (on clothing, appearance, relationships, career choices) can be offered pretty freely in a way that can be startling, but is generally very well-intentioned. If you’re invited round for dinner, take a bottle or some chocolates, as there will probably be a very generous spread laid on for you.

If you’re looking for a little bit of peace and quiet, try to get someone to invite you to their Dachas, as this is where Russians traditionally kick back and relax. Out in the country with big allotment-style gardens around them, dachas often are simple buildings with outside toilets and local wells supplying water. People grow vegetables (lots of them), pickle vegetables (often enough to last them through the winter months), make wine and home-brew alcohol, go fishing, hunt for mushrooms, and generally have a great time. 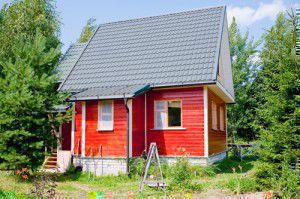 Go out in most cities in Russia and you can stay out all night. All night! And it’s not just clubs that stay open all hours, but cafes and restaurants too, so that you can actually stay in the same building and have an evening meal, go dancing, get breakfast, sit with a paper and carry on right into lunch, if you want to. A lot of places which look like inoffensive coffee houses and restaurants will acquire some dance-floors and professional dancers come evening, meaning you don’t have to venture out into the cold at all if you don’t want to.

Like with the dacha, if you’re after traditional Russian relaxation then go to a banya. A lot of towns will have public ones (often separate bathing days for men and women) but lots of dachas will have their own private ones. Russians like it pretty hot so if you’re not used to it then it might be a bit of a shock to the system. Extreme, humid heat is followed by being doused with bowls of cold water – relief for a few seconds, at least. Beating each other with birch twigs is also standard practice, but can seem like you’re crossing a barrier if you end up engaging in it with your host.

Russian food is all interesting and delicious, but what is particularly excellent is snack food, widely available on kiosks on any street corner. Ever had crisps flavoured with caviar or sour cream and dill? Or dried bread croutons, watermelon-flavoured chewing gum and dried salt fish (a traditional beer snack)? In bars and cafes, beer can be accompanied by fried cheese and deep-fried sticks of bread, or long laces of deeply salted, chewy cheese.

Not that all Russian food is snack food – far from it. Porridge in Russia is so varied that you can have porridge made from a different grain every day of the week, and people take pride in making the traditional soups (you’ll probably come across borshch, the beetroot soup shchi, the cabbage soup, and solyanka, the delicious soup with olives) and salads (of which arguably the best are selyodka pod shuboy – herring under potatoes, mayonnaise and grated beetroot – and salat Olivier, know worldwide as Russian Salad). 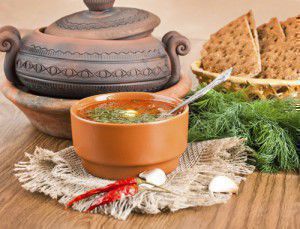 Being vast, there is a vast range of weather, but the cold winter is something Russia specialises in and there are lots of excitements around it. Fur markets (selling hats and coats in everything from rabbit to mink) spring up and it becomes a squeeze fitting everyone into the trolleybuses with their extra padding of coats, jumpers, thermals. On the lakes, people will bore holes in the ice and go ice fishing, traditionally accompanied by another, fishy soup, uha, into which you pour a shot of vodka just before eating.

Bit of an odd plus to end on, but queuing is a real art in Russia and it’s such an everyday thing that I quite miss it. The best sort of queue is at a train station, where your first big decision is which queue to join. Don’t be fooled into joining the shortest one, as it might be short because the cashier is about to take her hour-long break. A very small understated sign in the window will give the break times so you can estimate how long it will take the queue to move and choose a line based on that. It’s often best to be armed to the teeth with all the information you might possibly need to book a ticket (train number, date, type of carriage, whether or not you want linen) before getting to the front of the queue, as often the attendants don’t have time for dalliers and won’t hesitate to send you to the back of the queue if they see you floundering.

The other thing to remember about a Russian queue is that when you join it it might be quite a bit longer than it looks. This is because Russians will stand in several queues at once, physically in one and then virtually in another by simply telling the last person in it that they are standing behind them. It’s then the responsibility of that person to advertise the virtual person to anyone who comes along afterwards and of the newcomer to ask who is last (can be a bit confusing when the response to this is to point to someone the far side of the room). Depending on which queue reaches the window first, the queuer will either renounce their place in other queues or niftily dash across to reclaim one of their virtual places.

Got any favourite things about the country you’d like to add? We’d love to hear them! And don’t forget to learn a little of the language before you go.