There’s no doubt 2012 has been a pretty special year for the UK and the world, but it’s also been quite an eventful one at EuroTalk.

In January we released a new app, the first in a series to teach maths to primary school age children.

This is a part of our mission to reach a billion children with fantastic educational apps, to get them off to a great start in life. The most exciting thing about the apps is that we’ll be translating them into 200 languages so they can literally be used by any child, anywhere.

Maths, age 3-5 was an instant hit with parents and children all over the world, and we were delighted with the response. Ever since then we’ve been working hard on the next app, for 4-6 year olds, which has just this week been released to the App Store. The whole series will cover all the years of primary school and we’re really excited about the future!

Our work in Malawi has continued this year. In February, Andrew, Jamie, Zane, Alan and RoseMarie, who’s the author of the maths apps, travelled to Malawi to install iPods with the app translated into the local language of Chichewa, in primary schools. They also trained teachers and pupils on how to use the devices. The project is being run in partnership with the Scottish government, and last month Andrew and Jamie returned to Malawi, where they met with Michael Russell, the Scottish Education Secretary. He was delighted with the project so far, which has been declared a success!

We’ve also been really busy with our language learning programs. In October we released Talk More, Talk the Talk and Talk Business as downloads, as well as the Instant USB, which combines Talk Now and Talk More on one handy and portable USB drive, so it works with all the new computers that don’t have CD drives. 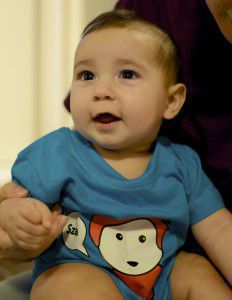 This year, Zsolt, Olga and Chelsey all welcomed new babies – and brought them in to the office so we could all have a cuddle! Zsolt’s little boy Barnie even became the new ‘face of EuroTalk’ for a while when we posted this photo on our Facebook page.

Sadly over the year we’ve had to say goodbye to a few people as Lotta, Ryan, Katie and Sheila all moved on to new challenges. But we also welcomed some new team members: Fiona, who looks after all our customers (and us) brilliantly; Pedro and Michal, our new app developers; Nat and Alex, who are busy getting our new products translated into hundreds of languages; and Tom, who’s only with us for a year but is already a hugely valued member of the team, helping with customer orders and product testing among many other tasks.

In October, Al, Franco, Glyn, Jamie, Zane and Zsolt all ran the Royal Parks Foundation Half Marathon in London in aid of some great charities. They all worked really hard training, and of course on the day itself, and are already talking about taking part again next year…

And that’s all for 2012! But we’ll be back in 2013 with more plans and exciting new products. Thanks for reading our blog this year, and we look forward to bringing you more news, opinions and guest posts next year! And as always if you have anything you’d like to share, do get in touch.

Have a great Christmas and New Year, everyone!

Liz and the EuroTalk team