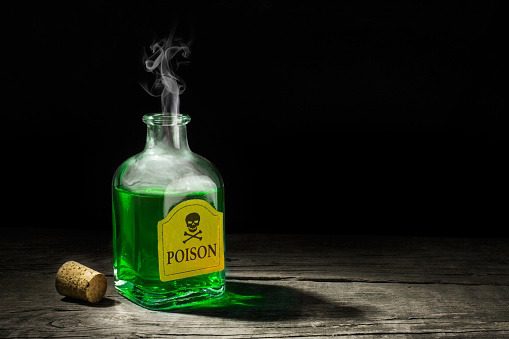 English speakers should be wary of receiving ein Gift from a German! That’s because Gift just happens to be the German word for “poison”! And more incredibly, both the English and German meanings stem from the exact same Proto-Germanic root – giftiz!

The word giftiz originally meant “something given” in Proto-Germanic and indeed, presents and poison are both given to somebody else, with completely different end-results in mind!

In German, the word Gift has completely lost its ancient meaning and now only has the “poison” connotation – except for the word Mitgift – meaning “dowry” or “bridal presents”. Since it is unlikely that poison would be part of a bride’s wedding presents, this is indeed a survival of a much broader definition of the original word.

The Dutch, being more sensible in this regard, have separated both meanings and come up with two slightly different spellings – gift for “present” and gif for poison.

Influenced by the German Gift, Scandinavian languages also employ gift with the notion of “poison”. But interestingly enough, the Scandinavian gift could also mean “married”, a term deriving from the old custom of giving the bride away!