Ever wondered what us language geeks do for fun in our spare time? Reading books about languages, of course! Well, not all the time – but I recently read the very interesting Through the Language Glass by Guy Deutscher, and would recommend it to anyone else who is interested in how different languages work, and how our mother tongue affects our thoughts and behaviour. 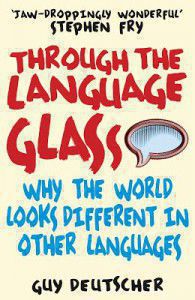 Through the Language Glass is all about the ongoing linguistic debate about whether our native language affects our perception and the way we think about the world around us. A large portion of the book is dedicated to a rather in-depth discussion about the differences between colour vocabulary in various languages. You might already know that Russian and Italian have two words for ‘blue’ (light and dark blue). But you might not know that the famous Greek writer Homer didn’t have any words for blue, and instead used mostly red and black to describe the scenes of the Iliad. This led to a long debate about whether people in the past lacked our modern ‘colour sense’ and saw the world in only a few shades. You’d probably have to be pretty dedicated to trying to understand the evolving debate on the development of linguistic terms for colours to plough through this rather long section, but it is rather interesting if you’ve got the patience.

The rest of the book moves on to some interesting discussions of smaller tribal languages in Australia and elsewhere, and how their unique features either reflect the requirements of the society/location, or affect the behaviour of the speakers. For example, the Aboriginal language Guuguu Yimithirr has no words for left and right. Instead, speakers must develop an acute sense of North, South, East and West, as it’s impossible for them to say ‘the tree is on my left’ – instead they must say ‘the tree is North of me’. Experiments have shown that even if speakers of the language are driven to new locations blindfolded, they retain their incredible sense of direction and can still describe location based on the compass directions.

And how about grammatical gender? For us English speakers, referring to a table as ‘she’, as a Spanish speaker would (la mesa), or a girl as ‘it’, as a German would (das Maedchen), seems rather odd. But for most Europeans, using a blanket ‘it’ for everything doesn’t really feel right either. So what does this mean for all those speakers of languages with grammatical gender? Do they somehow see a table as girly and feminine, and a phone (el teléfono in Spanish) as macho and masculine? Well of course not… that would be silly! But there may be subtle ways in which these distinctions affect us. Think about how we can tell a story in English being vague about the gender of the person involved. Yesterday, I had dinner with my friend. Whether that friend is male or female is none of your business! But in Spanish, you’re rather forced to disclose that ‘la amiga’ was of course a girl.

We might find the idea of a ‘gender’ for inanimate objects strange and funny, but Deutscher traces this back to at least an original logical starting point. It might surprise you to know that there are many more genders in language, beyond the masculine, feminine and neutral genders you might already know. Some languages even have a ‘vegetable’ gender, which even includes things like aeroplanes. Why, you might ask? Well, it’s simple really. The ‘vegetable’ gender may have started off for only plants. This would have included wood, and anything made from wood, such as a boat, perhaps. It’s then not such a jump to having other vehicles in the same gender.

If any of this sounds intriguing and you’d like to know more, I recommend that you pick up Deutscher’s book. It’s not quite beach reading, but it’s accessibly written, not an academic tome that’s only for linguists.  I can guarantee that you’ll learn something new about languages and maybe gain a different perspective on how your native language affects your perception.