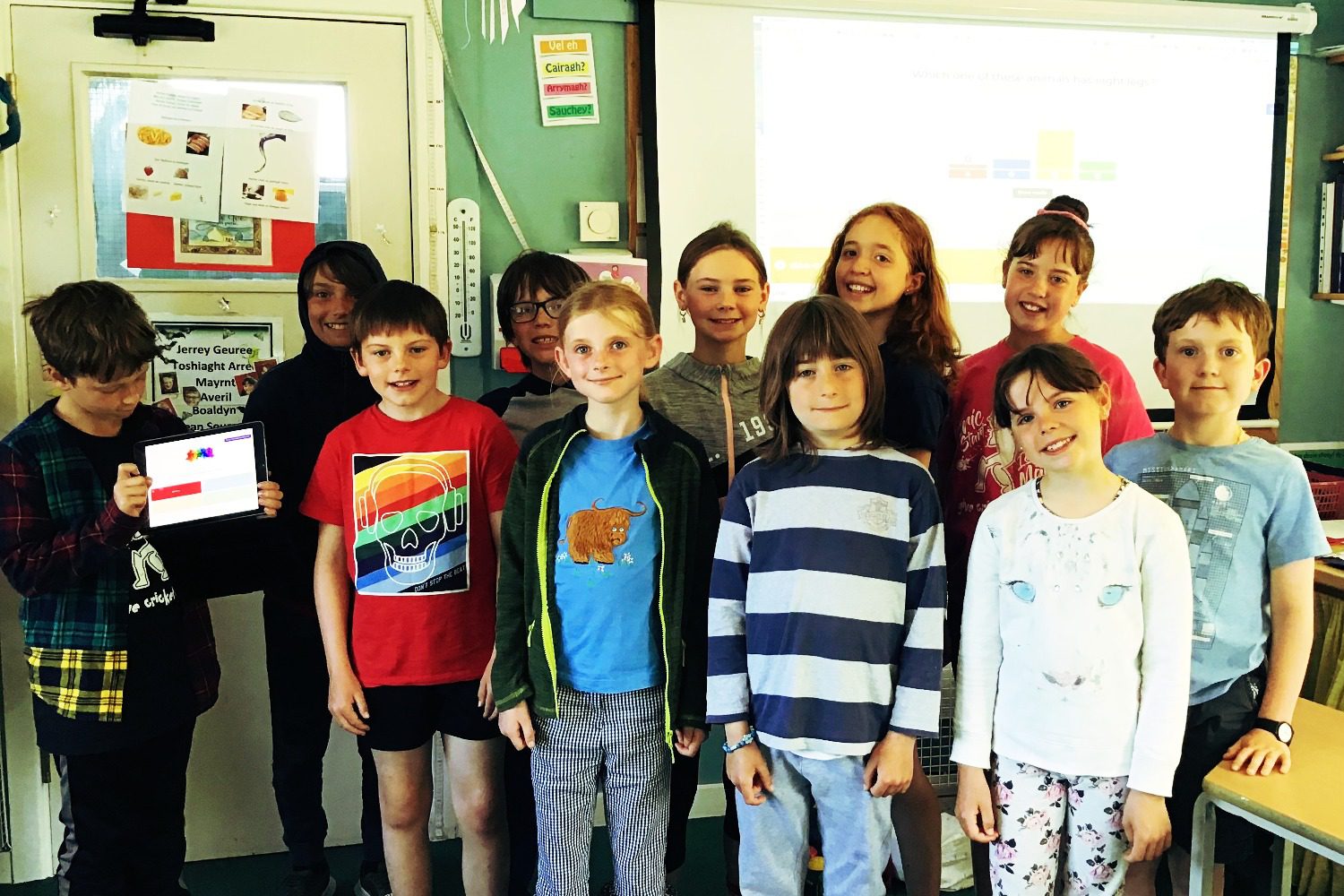 More than 800 children across the UK are speaking Manx in their classrooms this week [June 1-16], with the support of pupils (pictured) from St Johns on the Isle of Man.

The UK children are learning Manx as part of an annual competition called the uTalk Language Games, which aims to show youngsters how fun and easy it can be to learn new languages.

And, as Manx is the chosen language for this year’s final, the Isle of Man’s Bunscoill Ghaelgagh – the only school in the world to teach all its lessons in Manx – has kindly stepped in to offer expert help.

This month [June 2], children from the school took part in an online rehearsal of the uTalk Language Games Final (by answering quiz questions on Manx!) to check that everything worked smoothly.

Then at the online final itself, due to take place on Wednesday June 16 with up to 30 finalists, ex-Bunscoill Ghaelgagh pupil Sophia Taylor, 18, has volunteered to help the uTalk quizmasters by reading out Manx words and phrases.

Headteacher of the Manx medium primary school Julie Matthews says: “We are all thrilled that the uTalk Language Games is bringing Manx to a whole new audience. The pupils think it’s great that other children are learning their language and are keen to do anything they can to help. Everyone really enjoyed testing out the quiz and there were lots of cheers as names moved up the scoreboard!”

Entrants in the uTalk Language Games have been learning Manx by playing games on the uTalk app and recording themselves copying the pronunciation of native speakers.

The headteacher of the Bunscoill Ghaelgagh is the female voice on the app and her partner, Chris Sheard, who is also a Manx translator, is the male voice.

uTalk Language Games Founder Richard Howeson says: “We’re really grateful for all the support we’ve had from people on the Isle of Man. Manx is an important part of the history of the British Isles and we feel very privileged to be able to introduce the language to hundreds of UK schoolchildren.”

Manx is a Celtic language indigenous to the Isle of Man where it is called Gaelg. It is closely related to Scottish Gaelic and Irish and is also related to Welsh, Cornish and Breton.

It is classed as an endangered language by UNESCO but is currently undergoing a revitalisation thanks largely to the support of communities on the Isle of Man. These include the charity Culture Vannin – which works to promote and protect Manx language and culture – and the island’s government.

uTalk is a London-based language learning company and its award-winning uTalk app helps people learn how to pronounce and recognise 2,500 useful words and phrases in Manx. To receive a 30% discount, please go to uta.lk/manx-offer.

The final of the uTalk Language Games usually takes place in person using the uTalk app/computer software. This year, because of the pandemic, it is being held online instead and for logistical reasons will use Kahoot. Entrants will be tested on their knowledge of Manx words and phrases in the Kahoot quiz and will win points for getting the right answer and for being quick on the button.

To find out more about our voice artists and how we added Manx to the uTalk app, go here.