For most people, ‘Chinese food’ would represent the customary weekend or end-of-the-month takeaway, which could include chicken fried rice, spring rolls or even barbeque spare ribs. It is a fact – little known as it may be – that many Chinese families do not eat these dishes on a regular basis.  Most of them are probably cooking meals like these daily and are sick of it! 🙂 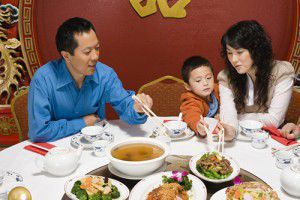 Ever since I was young, my parents have stressed the importance of traditional Chinese cuisine, and as chefs, they know it’s all about the flavour. Dinner is the most important meal, as this is the time when all the family sits down to eat.

The main ‘ingredient’ to a usual family dinner is steamed rice or ‘fān’– always white long grain rice, never wholemeal or pre-boiled, and it is always cooked in a rice cooker.  Each person at the table has their own bowl of rice and they each pick some ‘sūng’ – dishes that are laid out in the middle, so everyone can have a bit of everything.  ‘Sūng’ can be things such as steamed fish with ginger and spring onions, cured meats or mixed leafy green vegetables with oyster sauce. My father does most of the cooking so he sometimes creates his own dishes, such as stir-fried tofu with pork and sweetcorn or marinated chicken wings.

The number of dishes available varies to cater for however many people are at the table, and dinnertime is only over when all of the dishes are eaten – it is sometimes a tough job but it has to be done!

Since living in London, I have tried a number of different cuisines, such as Greek, Lebanese and Japanese, but nothing seems to fill in the gap of a family dinner.  Regardless of whether it is Chinese New Year or even just to celebrate the fact that it’s Sunday, I have been unable to indulge in the comforts of a close-knit family dinner as often as I would like to and the idea of resorting to a takeaway, just to fill the void, seems like a somewhat empty substitute.

Has the family dinner gone out of fashion or to some people, is there no place like home?