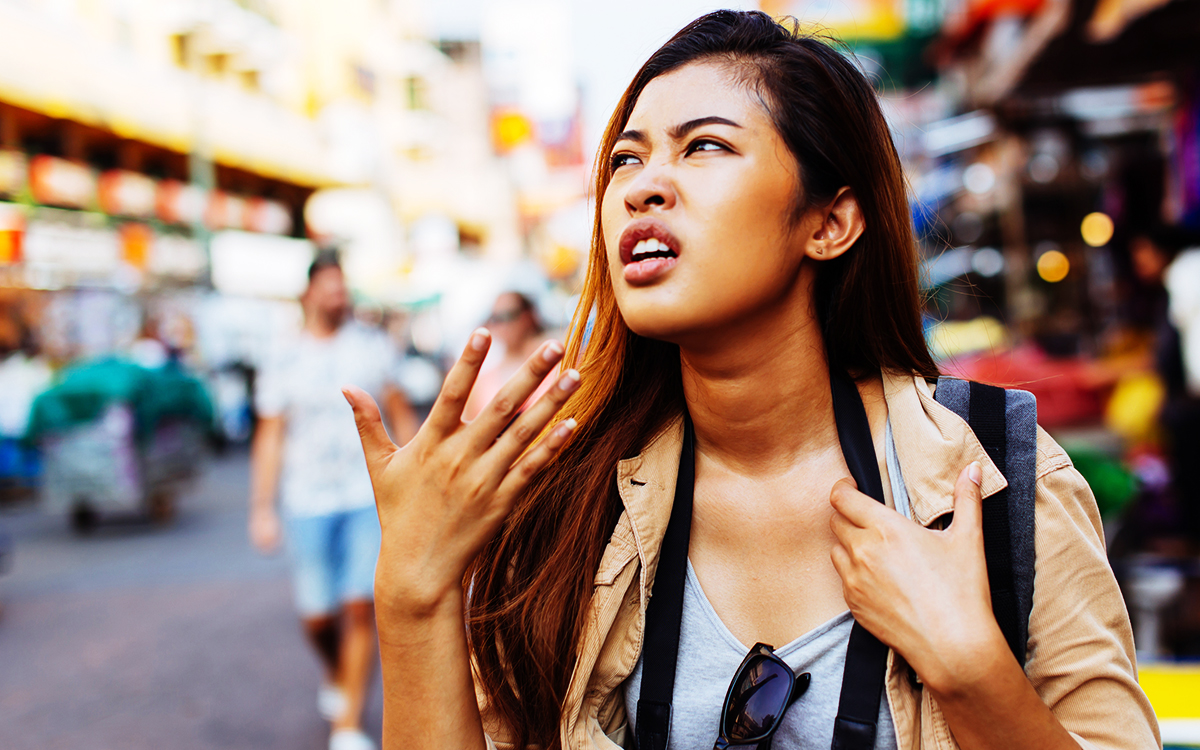 With temperatures relentlessly rising in some parts of the world, and massive floods wreaking havoc in others, it’s high time we learnt how to complain about the weather in the language with the highest number of native speakers: Mandarin Chinese. After all, odds are, if you grumble dramatically in Mandarin, someone somewhere will understand you.

The Mandarin word for ‘hot’ – applicable only for describing the heat of the weather, as opposed to the temperature of one’s soup or the attractiveness of one’s significant other – is 热. This is pronounced rè; it sounds rather like the ‘-ror’ in ‘horror’, but with an exasperated or slightly annoyed falling tone.

Now, it might look complicated, but don’t fret. Here’s a tip on how to remember this character – pay attention to its shape!

The character for ‘hot’ is made up of three parts: a hand in the top left corner, a figure of a person kneeling with both hands outstretched* in the top right, and fire at the bottom.

*You can still somewhat make out this shape, though thousands of years of reform and simplification have made it somewhat abstract. You can still see the fire quite clearly in comparison.

Let’s start with the hand. Over 2000 years ago, the character for ‘hand’ really did look more like one, albeit a hand with a slightly unusual arrangement of fingers.

Now, let’s take a look at the part that represents a kneeling person with both hands outstretched. The ancient form looked like a kneeling stick figure with the two ‘hands’ written in an unusually stylised manner.

Finally, while the fire used to look more like an actual flame, the current compound form (used to create complex characters made up of combinations of simpler characters) still looks like the remnants of a campfire. Or, perhaps, sparks spreading from a flame.

The sense of this character is thus rather like a kneeling person stretching both their hands over a fire. What do they feel? Heat, of course! Hence, ‘hot’.

Bear in mind that the above character is the modern Simplified Chinese version, as used in Mainland China, Malaysia, and Singapore. If you decide to learn Cantonese instead or if you’re headed to Taiwan, then the older Traditional Chinese form you’ll encounter will look like this: 熱.

But don’t worry! The traditional form is put together in a very similar way.

There are four parts to this character. A plant in the top left corner, then the word for ‘earth’ or ‘soil’ beneath it. The figure of the person kneeling with both hands outstretched is in the top right, and there’s fire at the bottom.

Together, these actually represent a person with outstretched arms putting a plant into the earth. In ancient China, planting was done during the warmer months, hence the overall meaning of ‘hot’ or ‘warm’. The character for ‘fire’ at the bottom further emphasises this meaning.

Using 热 in a sentence

Now, how do we use this word in a sentence? Let’s take this example:

But wait a second! If you’re a beginner in Mandarin, then you’ll know that the sentence 我很热 literally translates to:

So, they’re not exactly the same, are they? Why does ‘I feel hot’ in English suddenly become ‘I very hot’ in Mandarin?

Welcome to the fascinating world of Chinese grammar!

Firstly, when describing a person, animal, object, place, or situation using a simple adjective like ‘hot’, ‘big’, ‘pretty’, ‘tall’ or ‘cute’, Chinese does not use the verb ‘to be’.

Instead, a special word – in most cases the word 很 (hěn), which means ‘very’ – is added right before the adjective to tell the listener that the next word is descriptive. This construction is used where English speakers would use ‘am’, ‘is’, and ‘are’, followed by an adjective or descriptive word.

Thus, ‘you are tall’ is literally 你很高(nǐ hěn gāo; you very tall) in Mandarin.

This is why ‘I very hot’ in Mandarin translates into English as ‘I feel hot’. Although then again, ‘I feel hot’ in English should be more like ‘I am hot’ in other languages – it’s just that English has this weird way of using ‘to be hot’ to describe someone who is exceedingly attractive!

You might be wondering, then, how do Mandarin speakers actually say something is ‘very hot’? As in, having excessive heat? Since ‘very’ has been co-opted into a role similar to a helping word to tell us that the next word is a description, how do we construct that?

Well, that’s a story for another day!

Complaining about the weather

Now we know a little about how 很 works in a sentence, we can say things like:

Notice the 很 just before the descriptive; in this case, our new character 热.

But that’s not all we can use 热 for…

Just like in English, many common Mandarin expressions make use of the word 热.

A ‘hot issue’, for example, is a 热点问题 (rèdiǎn wèntí – literally, ‘hot point problem’), while a cup of hot tea is 一杯热茶 (yībēi rè chá). Someone who is warm-hearted is 热心肠 (rèxīncháng – literally, ‘hot heart intestines’). If you have a fever, you are 发热 (fārè, or ’emitting heat’). Finally, someone who is popular is 热门 (rèmén), which literally means ‘hot door’!

Why would a popular person be a ‘hot door’? In Chinese-speaking countries, popular variety shows on TV often have a ‘hot door’, the 热门 on stage through which a special celebrity guest enters. Hence, ‘hot door’ became a common term for ‘popular’. The opposite of popular is – you guessed it! – ‘cold door’, or 冷门 (lěngmén).

If you’re suffering from the heat, then you can shout out in absolute annoyance:

This means ‘it’s so hot I don’t have any friends’. Probably because sweating and stinking due to the terrible heat has scared everyone off.

Use the uTalk app and you’ll find yourself making new friends in no time! Choose from over 150 languages – including Mandarin Chinese – and play games to learn around 2,500 useful words and phrases. Get started today!