But this weekend was an exception, because Saturday was St Piran’s Day,  the national day of Cornwall, and London was celebrating in style with its annual Shoreditch celebration, Kernow In The City.

So what’s it all about?

No, I’m joking, of course – in fact, I find St Piran’s Day is one of the more sober Cornish celebrations, as it’s really more about celebrating the culture of Cornwall. Back home, different towns have different traditions, but usually there’ll be music and singing, a parade of some sort, perhaps some dancing and dressing up, occasionally a pasty competition. In Westminster, the Cornish MPs hold a cultural reception which aims to teach more about Cornwall’s identity and culture. 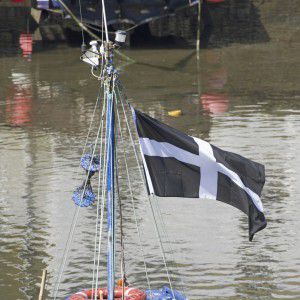 The Shoreditch evening event, which I’ve been going to for a good 4 or 5 years, is also primarily a cultural celebration, with different Cornish talent every year and a heavy focus on music (this year featured the amazing Flats and Sharps as the grand finale, last year saw The Oggymen taking centre stage), as well as a variety of comedians (The Kernow King has been guest of honour in the past, and still usually makes a remote appearance via video).

But get a lot of pining ex-pat Cornish together and a few kegs of Betty Stogs beer and it will inevitably turn into a somewhat tipsy affair, with plenty of drunken dancing by the end of the evening. And that’s part of the reason I love Kernow In The City: every year I take along a few non-Cornish people, who tentatively agree to attend in the full expectation of being hounded out of the venue for being English, and although some of the in-jokes about miniature Cornish villages do go over their heads, and the bilingual compering leaves plenty to be understood, by the end of the evening they’re usually bellowing out the words to Trelawney (our national anthem) with great passion, and dancing with total strangers.

Nothing could do more to dispel the myth of the Cornish cold shoulder than the St Piran’s Day event: take a small interest in Cornish culture and you really will be welcomed with open arms. Learn a couple of words of Cornish and you’ll be the talk of the town. And if you’re going to learn anything, learn these three words: Kernow Bys Vyken (Cornwall For Ever), a toast to make you Cornish friends for life.