Today we have a guest post by Stephen Thomas, on behalf of Pearson PTE, on why it’s important to expose children to other languages at a young age.

Why expose children to other languages?

Communication is fundamentally part of what makes us unique organisms on earth. The way that we have developed language to exchange concepts, ideas, narratives and so on with sounds that are culturally recognised to the degree of complexity we have, is distinctive and unmatched by any other organism.

Clearly then, learning a language reaps obvious benefits: we can learn and understand new things with ease, retain ideas throughout decades, make each other laugh and cry, discuss, debate and develop the most fundamental questions of philosophy – all through using just one language. So aside from the want or need to communicate with speakers of a different language, is there any benefit of being bilingual or raising children that are bilingual? Well, Pearson PTE spoke with Dr Catriona Morrison, senior lecturer in psychology at The University of Leeds who advised that there is evidence to support the notion that merely exposing children under the age of five to other languages has benefits, regardless of whether or not they become bilingual. 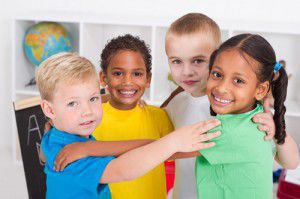 Between the age of 3 and 6 is a vital stage of childhood in terms of language learning and development. The malleable mind of a child
at this age is like a sponge and Dr Morrison advises that “after the age of five, it is highly unlikely to acquire the mother tongue of a language if it is not yet already acquired”. Although in later childhood or adult life we may learn a new language, we can be sure that we do not learn it with anything like the same ease that we would as a child. After this crucial point in child development there begins a change in the human brain that effectively shuts down the ability to ‘naturally’ learn language. Of course that doesn’t mean you can’t learn a language in adulthood, but if you have, I’m sure you will agree that it is much more difficult in contrast to a truly bilingual person (who learned two languages before this crucial stage) whereby the two languages are seamlessly managed within the brain as though they were one.

Furthermore, Dr Morrison suggested that bilingualism seems to act as a preventative mechanism against the onset of dementia or Alzheimer’s disease. Although it will not create immunity and one may still fall to the condition, statistically if it is going to happen it will happen later in life, when compared to monolingual sufferers. In layman’s terms this could be because one is using more of the brain when accessing two or more languages and thus the brain is more active, and an active mind is a healthy mind.

How can we help children to discover languages?

So if you are a monolingual parent and you see the benefits of bilingualism in younger children, how should you go about helping your child? Realistically, a child of monolingual parents isn’t going to become bilingual, even with partial immersion in other languages through accessing foreign television radio or sending them to a nursery that caters for multiple languages. This is why Dr Morrison agrees that it is such a tragedy that the UK’s schooling system doesn’t introduce children to other languages as it is at this vital time of youth that we have the change to expand their minds in a way that isn’t possible at any other stage of life.

However, this doesn’t mean that the exposure is pointless or irrelevant: “I have a lot of faith in the idea that the more languages a child is exposed to, the better,” says Dr Morrison. Part of what makes language learning hard is that a new language draws on an entirely alien phonemic inventory to what we are used to hearing. When we try to listen to and learn these sounds, our brain simply isn’t accustomed to hearing them. So there is definitely a benefit for parents endeavouring to expose children to these sounds that they would otherwise be starved of and therefore selectively excluded from the brain; absolutely do allow your children to watch  foreign TV shows or listen to internet radio form other countries and if possible encourage human interaction with your child and other language speakers. This will only help and bolster their learning and development.

If you’d like your children to start learning a language, why not try our Vocabulary Builder program? With its colourful characters and fun games, it’s a great start for young learners – and it’s available in over 100 languages.