Last weekend I had the very fortunate experience of being taken to Iceland for my birthday. I was only there for three full days and I don’t think I have ever fallen in love with a country as quickly as Iceland. Here are my top ten reasons to visit, but first, if you ever get the opportunity to go, take it; I guarantee you wont regret it.

This was my first port of call from the airport. You can definitely visit the lagoon before your departure or just after you arrive.  The lagoon is such a surreal experience; it feels completely wrong to be getting into a bikini when it is -2°C outside. It is a mad dash to get into the lagoon but once you are in you’re instantly warmed up. Swimming around the lagoon you come across warmer patches and under normal circumstances you would be swimming away very quickly, but on this occasion you welcome them. There are free face masks around the lagoon, so everyone looks particularly funny swimming around with grey faces. When we eventually decided to drag yourself away, I have never felt my skin feel so soft. If you have time, sneak up to the viewing platform to really see how blue the water is.

I was very fortunate that I was able to see the Northern Lights (Aurora Borealis) for a whole hour. To try and describe the Lights is very difficult, because there isn’t anything that compares. They suddenly just appear, a glow, which ‘dances’. They move all over the place and constantly change in size and appearance. They need to be on everyone’s bucket list – they are simply beautiful.

I hadn’t really heard much about the food in Iceland before except that it was rather expensive. They are in fact known for their seafood and lamb, and I had the best food I have ever had there. I wish there were restaurants like that in London, because the meat was so tender. We ate at Mar and the Seafood Grill, both of which I would highly recommend. For more atmosphere I would pick the Seafood Grill and sit in front of the kitchen. In regard to price, if you have a budget you can stick to it, you may just have to have one course instead of two or three, but it is worth it.

In Iceland at this time of year the sun doesn’t rise until about 10:30am. I don’t know how they do it, I’d never to be able to get up and be at work when it is still so dark. Before the sun rises you have a twilight period, where everything becomes a very light blue. I have never seen a sunrise with such a vast range of colours.  It is also the best light to take some stunning photos in. 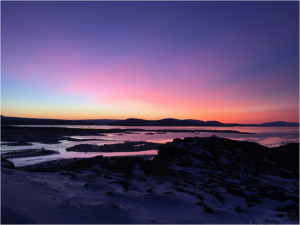 I was able to see where the Eurasian tectonic plate met the North American plate, which was unreal. The landscape is vast and there are a lot of volcanoes, which have shaped the land. As you travel throughout Iceland the landscape drastically changes, but it is stunning at the same time.

Snowmobiling is an adrenaline experience and one where you don’t want any cameras to be around. To get to the snowmobiles you are transported in an old military truck across the Glacier, which is very exciting. On arrival, you have to put a boiler suit on top of your other clothes, as well as a balaclava, a helmet and shoe protectors. They certainly keep you warm, but moving is a little restricted. The snowmobiles were very easy to drive and the added bonus was that the handlebars were heated so your hands couldn’t get cold. This was an additional feature on our tour – if you have the option to add it on too, go for it.

I saw the Gullfoss waterfall just as the sun was setting. As you walk down towards it, you can’t actually see the waterfall, just hear it. It isn’t until you turn the corner that you can see it, and it is such a shock to see the sheer size of the waterfall. In winter it is surrounded by snow and ice which I think added to its beauty. Prepare to be stunned.

I saw the Strokkur geyser, which has reportedly been around since 1789. It explodes every seven to eight minutes and is truly fascinating to watch. You can see the water begin to bubble and somewhat pulse, right before it explodes. When the geyser does erupt it is predominately steam rather than water. You could stand there for hours watching it erupt. 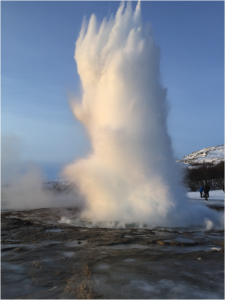 On the final day I unfortunately woke up to a very extreme storm, which even cancelled flights. Additionally this meant that the whale watching tour that I was supposed to go on was equally cancelled. However, this turned out to be a blessing; instead I bounced from café to café and it gave me a real opportunity to look around Reykjavik. The cafés were so cool; for much of the day I stayed in one called Laundromat, which has a definite American feel to it, and in the basement you could also do your laundry. Once I had breakfast they didn’t pester me to order more or to leave; I simply sat there and read my book and people watched for hours.

Everyone was so friendly in Iceland, always smiling and saying good morning or afternoon. In the café or bar people were always chatting to you and sharing experiences about Iceland. They just couldn’t do enough for you.

I had an incredible few days in this amazing country, and I can’t wait to go back and see even more of it, especially the volcanoes.

Have you ever been to Iceland? Have you seen or experienced any of the attractions above? We want to hear about your trip!