We’ve all seen the Italian city of Venice in the movies, but does it live up to its reputation as one of Europe’s most beautiful and historic cities? Amy says yes; here are her ten reasons to check out Venice for yourself.

I think this has to be a very obvious point, as of course Venice and boats go hand in hand. I was rather taken aback by the beauty of the boats, especially the private taxi boats, as they were all immaculate. If you’re landing when it’s still light, get a private taxi from the airport; it is magical and makes you feel like you’re in a James Bond movie cruising along the Grand Canal. 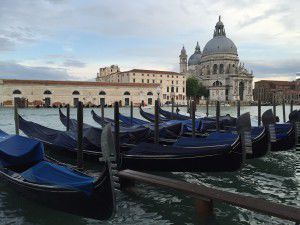 Once again I think this is quite a popular theme, but honestly just wander about taking little side streets, because you never quite know what you are going to find, maybe a beautiful street, bridge, shop… or possibly a dead end. As long as you have a map with you when you’re ready to head back, you will be absolutely fine. Once you get to grips with the city it is relatively easy to get around and soon you’ll be wandering off to places without even needing any guidance.

The first world that comes to mind when thinking about the different churches in Venice is WOW. There are a vast number of churches across Venice and the ones we went into were simply stunning. We managed to see several, including St Mary of the Friars, where you can see the famous painting Titian’s Assumption of the Virgin, which caused a lot of commotion when it was first revealed. We also saw San Moisè and Santa Maria della Salute, as well as many more. Each church has a different history so you can never get bored of going into different ones.

There are over 400 bridges in Venice and rather frequently you stumble upon one that’s just beautiful. They vary from concrete to iron; the concrete ones are traditional Venetian bridges, whereas the iron bridges are Austrian.

If you have the time I would definitely recommend hopping across to the different islands. Murano is the closest island, while Burano and Torcello are a little further away but still very easy to get to. We stopped off at Murano, which is famous for its glass, and we were fortunate enough to see the incredibly talented Glass Masters at work. Next was Burano, known for its lace and its colourful houses; this was so the fishermen could spot their house when they were out at sea. Finally we went to Torcello, which is tiny; there are only 15 homes on the island. Sights on Torcello include the Cattedral di Torcella, which was built in AD 1008, and the Santa Foscafe, which is very impressive to look at from the outside. 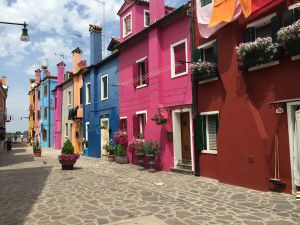 I knew Venice would be beautiful, but what I wasn’t expecting was all of the detail that can be seen everywhere, in the churches, the bridges, and even engravings on some streets to represent different districts. Maybe I had rose tinted glasses on, but whenever I thought I had seen something beautiful I rounded a corner and there was something that topped it. It may sound like a cliché but Venice really does take your breath away.

This is an absolute must, because otherwise you can walk past something and have no idea you have passed a major piece of history. The tour means you really get to know Venice and learn about its history and culture, I can’t even begin to describe how much I learnt about the city and how relieved I was that we did a tour. Without it you could be standing in the square where Shakespeare based The Merchant of Venice and have no idea.

I can honestly say that I had no idea about the extensive history behind Venice, from the several plagues they suffered, to the different Dukes in power and of course Napoleon taking over the city. You definitely get a better feel for the city once you know more about its history, as well as starting to notice different things yourself when walking around, like the different types of bridges I mentioned earlier, or how the Austrians had to have their own cafés as they were not welcome anywhere else. I would read a little about the city before you go, just so you know a little about the Venetians’ background.

In Italy you expect great pizza and pasta; however Venice is very much based around seafood, although we also discovered an incredible steak restaurant called Vini Da Artur where we had the best steak we have ever eaten. Of course we had pasta and pizza too, but there is really something for everyone. For drinks, I recommend the Hilton Skyline Rooftop Bar for views of Venice and of course Harry’s bar, which originally opened in 1931 and was where the famous Bellini was invented. It is expensive, but just go for one Bellini to say you’ve experienced Harry’s bar, because the atmosphere in there is fantastic. Finally, ice cream was a must for us over the few days we were in Venice, due to it being very hot. There is a different ice cream shop on all of the busy streets, and they do not disappoint. Because you have to have at least one gelato while you’re in Venice, right? 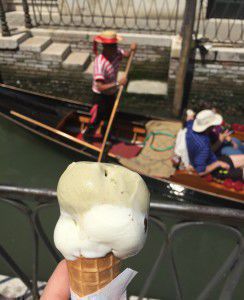 We’ve seen it in lots of films and pictures, but you can’t beat going and seeing it for yourself. Stepping into the square, the first thing you notice is how big it actually is. The main attraction – the church – is simply beautiful; the engravings all across the church and the different colours used are stunning. Going inside the church is a must, and you can pay €2 to go to the back of the church. Do it, you’ll see why. All across the square there are intricate engravings in the marble and different statues everywhere. I don’t want to spoil any surprises for anyone wanting to learn the history of the square, you have to go and experience it – and if you’re going with someone special, go at night too as it’s very romantic.

My only warning about Venice is that you do get harassed to buy a selfie stick or to feed the pigeons, so be prepared to say no!

And of course, don’t forget to download uTalk before you leave; even if you don’t have time to learn some Italian in advance, it’s a really useful app to have on your phone when you’re searching for the right word – we used it a lot!

Have you ever been to Venice? What did you think?