Did you know that you speak Italian?

No, really – you do. And we don’t just mean that time you ordered a pizza. Here are a few words you’ve probably used at some point, but might not have realised were Italian:

Longer than a short story, but not quite a full novel. Well-known novellas include John Steinbeck’s Of Mice and Men, Die Verwandlung (The Metamorphosis) by Franz Kafka and Giovanni Boccaccio’s Decamerone (The Decameron). The word ‘novella’ comes from the Italian meaning ‘new’.

The use of this term to describe photo-journalists who follow and take pictures of celebrities can be traced back to a character in Federico Fellini’s 1960 classic movie, La Dolce Vita. Reports vary as to why Fellini chose this name for the independent photographer in the film, but one version of events claims it’s a word from an Italian dialect describing the annoying noise made by a small insect.

Anyone who’s seen Pitch Perfect will know that a cappella means singing without any musical accompaniment, but its literal meaning in Italian is ‘in the manner of the chapel’. And it’s not the only Italian word used in music; the list is seemingly endless but a few examples are piano (quiet), allegro (lively and fast), crescendo (getting louder) and lacrimoso (sad).

The first spiders to be called ‘tarantulas’ were named for the Italian city of Taranto, where they were first found. Interestingly, these weren’t the hairy beasties we call tarantulas today, but what are now known as wolf spiders. (Not that we’d want to find either of them in our house.) Many people in southern Italy during the 16th and 17th century believed that a bite from the spider would cause a hysterical condition called tarantism, which could only be cured by dancing the tarantella.

Graffiti comes from the Italian word ‘graffito’, which means ‘scratched’, and in art history the term is used to describe work created by scratching designs onto a surface. The word dates back to the 19th century, when it was used to describe inscriptions and drawings found in the ancient ruins of Pompeii, and today has taken on a mostly negative connotation – no matter how skilful the artist, graffiti is generally considered synonymous with vandalism. 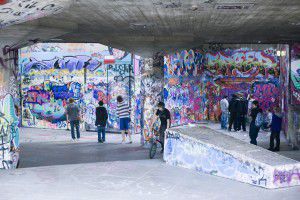 There are plenty more examples of Italian words that have found their way into other languages – among them:

Mafia: its origins are uncertain, but many believe it to be from the Sicilian word ‘mafiusu’, which means ‘swagger’ or ‘bravado’.

Extravaganza: a spectacular theatrical production, which takes its name from the Italian word ‘stravaganza’ (extravagance).

Quarantine: derived from ‘quaranta’, the 40 days of isolation required to try and halt the spread of the Black Death in the 14th century.

How many Italian words have you used recently…?