As you may know, EuroTalk have been working for several years towards the goal of bringing the best possible education to one billion children in developing countries. This work is something we’re very passionate about, and so we’re excited to announce the birth of onebillion, a charitable organisation set up by Jamie and Andrew from EuroTalk to focus solely on making this vision a reality. EuroTalk are proud to support onebillion as they continue their vital work, and we’ll be bringing you regular updates and news on what they’ve been up to.

So for today’s post, it’s over to Alex for an update from Malawi:

Over here at onebillion, we’re working hard on producing the final six topics for Maths, age 4-6, writing and programming a practice app to accompany Maths, age 3-5 and planning a whole lot of new Learn to Read and Letters and Sounds material. We’re also making progress, slowly but surely, towards expanding our Masamu (maths) project throughout all 5,000 schools in Malawi!

So, what have we been up to in Malawi recently? Well, first and foremost, we’re in the process of looking for a second school in which to implement our Masamu intervention. This has been running successfully at Biwi school in Lilongwe for almost a year now and an independent study by the University of Nottingham has shown that using the apps for as little as eight weeks can drastically increase children’s level of maths knowledge. So Andrew and Jamie have spent a couple of days at Ngwenya school, also in Lilongwe, to assess its suitability as a second school for us to get working in. Ngwenya seems to be a well-organised school, and even has desks in its classrooms! However it is a huge school with 5,000 pupils in total – meaning it will pose some challenges in terms of scaling our current intervention. 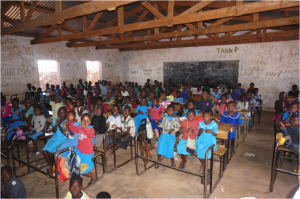 Work is already under way to construct a new learning centre in the school, like the one we’ve been using at Biwi, where the children will have a dedicated space to come and work in, and there will be somewhere to store and charge the ipads. 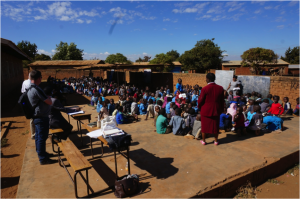 Speaking of charging the devices, we’ve also been road-testing solar-powered charging to allow large quantities of iPads to be charged even in rural schools which may not have electricity. Biwi school has access to a power socket in the head teacher’s office, but this is restricted to just the one room, and even this is fairly uncommon in Malawian schools, so finding an alternative way to charge the devices was really important to us, and will continue to be as we look at scaling further afield in other parts of Africa. 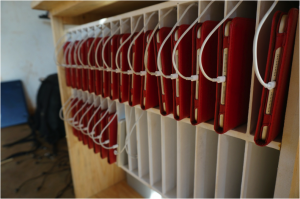 Our solar charging stations have been working great so far, and are simple for the teachers to use.

We’ve also just implemented our brand-new battery-powered, low-cost printers at Biwi. These allow the children to immediately print their certificates which they win as they complete each topic within the Masamu apps. These are printed on a cheap and durable receipt-style paper, which is a simple and low-cost way for the children to see the results of their hard work, and the teachers to keep records of their achievements. This will work hand in hand with our new server version of the apps, which was the main purpose of Jamie and Andrew’s visit. It allows us to receive data from schools in Malawi almost instantly, keeping us up-to-date on which children have completed which topics, and their results. Hopefully we’ll start to receive data from the server within the next week or so, and will be able to see the apps being used in real time. 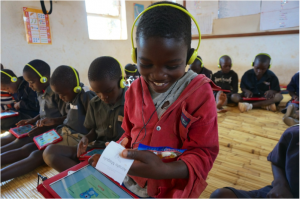 So it’s onwards and upwards in the onebillion office, and we’re really excited to see results coming in from Biwi school and to get our Masamu apps into Ngwenya school. We’re also hoping to get some new topics ready in Chichewa within the next couple of months, which will extend the current Masamu 4-6 app from twelve to eighteen topics!

1 thought on “An update from Malawi”