Gloria’s post today is about her work on the EuroTalk roof garden, which is a lovely place for us to enjoy in the summer sunshine. Getting it that way hasn’t been easy, but the end result shows that sometimes it’s worth persevering. The same could be said for learning a language!

When I was first handed responsibility for looking after the roof garden at EuroTalk I felt quite smug. Easy – or so I thought! And a good reason (or excuse?) for removing myself from the computer screen quite often. I have a large garden at home, so I already have a lot of experience in planting, pruning, weeding and watering etc. What’s more – I know it’s an ongoing task for at least nine months of the year, so I expected a lot of hard, back-breaking work in the open air. I wasn’t wrong!

What I didn’t bargain for was the changing face of EuroTalk. 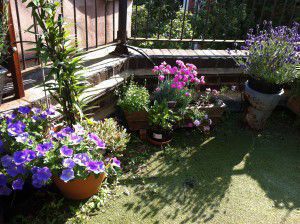 Last summer (2012) I had a beautiful display of colours blending up on the roof. My favourites are the pinks and mauves, so I’d planted a whole lot of flowers in these colours. By June the roof garden was looking really healthy and beautiful and I felt that all my backaches had been worth it. Then it happened!

In July the builders moved in. They erected scaffolding on the terrace and moved a lot of the pots to safer places while they worked on building a new room and putting in a panoramic window which formed the entire exterior wall of this extension. But this took time – nine months, to be exact. I could have had a baby in that length of time (well I couldn’t, but one of our younger staff did!)

The two canvas sails, which had created shade for anyone sitting at the huge wooden table, were removed and allowed to hang up against a wall, thus preventing both light and rain water from reaching a number of the troughs and pots throughout the autumn and winter. Builders rubble appeared out of nowhere – bricks, cement, wood, plastic bags and sacks etc. – you name it and it appeared on our lovely roof terrace. I sat and cried, and vowed to myself that someone else could sort it all out once the building work was finished. I’d had enough. I felt totally disillusioned at all my hard work being destroyed.

Although I went on to the roof garden several times during those dark months, I wasn’t able to do much other than put some water on the dried out pots and cross my fingers!

Then finally, in March 2013 the building work was completed. On the third attempt, the panoramic window was finally fitted satisfactorily and the scaffolding eventually disappeared. The rubble was cleared away and all the pots were put back into place. The builders did a very good job of cleaning the roof garden and the artificial turf began to look like real grass once more. Even the cigarette ends disappeared.

Then began the task of resurrection. A number of visits to the garden centre worked wonders. Then the automatic watering system caused a number of problems. Not all pots had feeds off the main, so this had to be sorted out. Once we had additional bits and pieces, again I thought it was finished. Not so. The older bits didn’t like working with the newer ones so another visit to the garden centre was required. With help from two of my colleagues (Alan and Steve) it is now working correctly. Fingers crossed again! 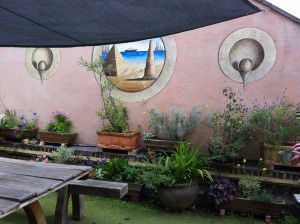 I split and transferred the crocosmia so that both cauldrons now contain orange crocosmia and a potentilla – one yellow and one white. The main pots and troughs are back up and in full flower, mainly pinks and mauves of course, but with a few other colours added for variety. I’d managed to salvage the lavenders, but it took a lot of T.L.C. and I’m now happy once more with the result – a verdant, lush, colourful display.

With the constantly changing colours and differing amounts of foliage as the year progresses, I see it as a kaleidoscope of never-ending challenges. And I’m currently rooting some chocolate mint on my desk to replace the one that shrivelled from lack of water. Yipppeeee – it’s working.

But I’m begging our bosses, please don’t plan to do any more extensions. My back and my temper can’t take it…….