I quite like the way that the iconography of  foreign languages and exotic scripts happily manages to pervade  our popular culture. It’s all over the place – it’s on the streets, we wear it , we eat it, we watch it and much of the time we have a laugh. And we have a bunch of rather clever advertisers and retail brands to thank for it. 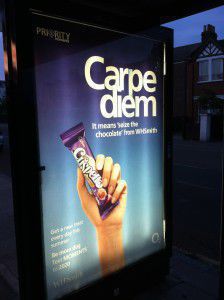 Shall we begin with a little Latin? If you’ve been watching O2’s hilarious ‘be more dog‘ ads or sat at one of the 10,000,000 bus stops in London you will now know that the timeless rallying cry Carpe Diem has hit the streets. And, once you’ve had a hoot at the cat-that-turns-into-a-dog footage, you’ll have learnt that Carpe Diem means…  ‘Grab the Frisbee’.  I somehow think that Horace, who wrote the words c. 50 BC, would have agreed it was not too bad a translation for 2013 AD. I love the idea that some Latin is out there and available to all, a call to make the most of it, to seize the day!

So make a noise for VCCP, the agency who dreamt the whole campaign up;  as an ex JWT exec myself , I am impressed. 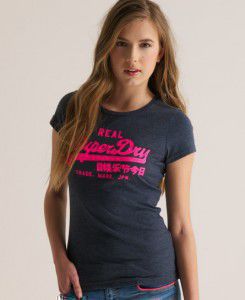 And now to Japanese. How many of you think that the Superdry clothing brand, with its cool hoodies, tops and t-shirts plastered with Kanji and Hiragana, comes from Japan? Sorry to disappoint, but Superdry has its origins not in an office in downtown Tokyo, but in a market stall in Cheltenham, where a guy called Julian Dunkerton began selling branded clothing and later had the idea to use Japanese script on his clothing. And the rest, as they say, is history – Julian is now the Chief Exec of one of the UK’s top clothing companies.

It may be reassuring to know that although the company itself is no more Japanese than a benko box from Pret, I am told that the writing is not gobbledygook but does actually mean something: which I am sure is neither unprintable, nor deeply philosophical, but I rather like the idea of millions of people in London walking around with Japanese on their backs – and their fronts.

Of course I am not attempting to connect any of this to a serious attempt to learn a language – though the thought of people queuing up to take degrees in Classics and Japanese is a most appealing one.

However,  I’m sure that most of us have at least some interest in the world around us, and iconic branding and imagery can often excite our curiosity, make us think a bit and have us see the world in a slightly new and refreshing way.