Reading Nat’s post about all the fascinating linguistic differences and difficulties that she and her translators experienced when translating the new uTalk app, I was reminded of some of the similar issues we’ve had in localising the maths apps. What seems totally normal to a three-year-old in the UK might not be all that familiar to a kid in Malawi, for a start! Not to mention the fact that (unfortunately for us English speakers), not all languages follow our grammar rules. Here are a few of the cultural and language localisation issues we’ve come across recently… 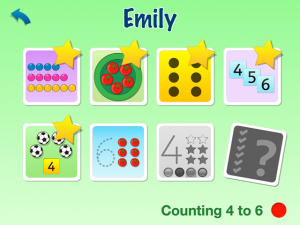 In Swedish, there were a couple of interesting language differences, for example: you cannot use the same word for ‘height’ in Swedish for an object such as a house as for a person (Välj det Längsta barnet – choose the tallest child, but Välj det högsta trädet – the tallest tree), whereas in English we can say short or tall regardless of the object.

In Malawi, some of the ‘everyday’ objects featured in the apps probably seemed more than a little strange. In fact, Chichewa is strongly based on words for things that people see and encounter in daily life. Our translator had to get a bit creative and come up with ‘equivalent’ names for objects such as a robot (a doll in the Chichewa version), a turnip (a potato in the app), a dragon (she had to use a description meaning ‘a fierce animal’) or a fridge (replaced by a cupboard).  There are also many more ‘technical’ words which don’t exist in traditional Chichewa, such as shapes. These are therefore normally given English names with a slight Chichewa accent (sikweya, trayango, rekitango and so on).

This is quite similar in Wolof: many items simply do not have a name in Wolof, or the words are unfamilar to most young people. Many items are therefore named in French instead, such as animals (giraffe), shapes (cercle) or fruits (banane). Above about 10, Wolof-speakers also tend to revert to French numbers instead of the more complex Wolof system (similar to the Chichewa – 5 and 1, 5 and 2…). 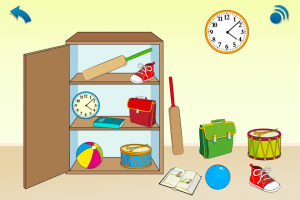 As with the uTalk app, Polish proved an especially problematic language for us too. One of the biggest issues was that in Polish the word for ‘you’ is dependent on gender. The translator mainly dealt with this by saying ‘we’ (e.g. Nauczyliśmy się/robiliśmy – we learned/were learning how to…), rather than addressing the child playing the app as male or female. It is also not usual to use prepositions such as ‘inside’ and ‘outside’ when describing the location of an object. e.g. instead of saying ‘the book is outside the cupboard’, Poles would normally say ‘the book is not in the cupboard’. Similarly to many other languages, some of the objects were also not very familiar: a cricket bat is not a well-known object, so it was translated as kijek – a little bat, and mangoes were translated as owoce – a fruit, as mangoes are not a ‘usual’ fruit in Poland – the same was the case with the Hungarian app, where we translated mango as gyumolc – also a generic word for fruit.

In Portuguese, there is no real way to distinguish between ‘more’ and ‘most’ or ‘less’ and ‘least’.  Mais means both more and most, and menos less/least/fewer/fewest. This is also the case in Welsh: ‘bigger’ and ‘biggest’ translate to mwy and mwyaf respectively, but ‘more’ and ‘most’ also translate to mwy and mwyaf.  The same goes for ‘smaller’/’smallest’ and ‘less’/’least’ (llai, lleiaf). On the other hand, there are different words for top and bottom shelves. Generally ‘top’ and ‘bottom’ are top and gwaelod but ‘top shelf’ and ‘bottom shelf’ are silff uchaf and silff usaf.

I was also intrigued to find out that in Amharic (an African language spoken in Ethiopia), they have a completely different system for telling the time: ‘1 o’clock’ does not mean lunch time, it in fact means ‘the first hour of the day’, i.e. when the sun comes up, and the rest of the day is counted from there.  In fact, “Telling the time’ has been one of the hardest topics to localise, as our ideas of what happens at what time are not exactly international. Our French translator not only found the idea of eating a boiled egg for breakfast rather funny, but also pointed out that schools finish at 5 in France, not 3 as in the app, and a child would eat dinner at 7 or 8, not at 5 or 6! In Spain this is even funnier, as Spanish children regularly eat their dinner at 9 p.m., and go to sleep at 10 p.m. or perhaps later at the weekend or on holiday.

These are just a few of the language and cultural issues we’ve encountered on the maths translation project, and there are sure to be more! We have 10+ new languages ready to be released, and many more in the pipeline, so watch this space!

And also now available (in English only for the time being), Counting to 10, our first maths practice app, is on sale in the iTunes App Store for iPhone, iPod touch and iPad, and Google Play, for Android devices.