On Friday 16th October, our 33 Junior Language Challenge finalists came to London to battle it out to win the trophy. The children have learnt three languages during the course of the competition, with Portuguese being the first language, moving onto Mandarin for the semi-finals and Arabic being chosen as the final language.

All three heats at the final were extremely close, with several children having nearly perfect scores! Once all three were completed we paused for a lunch break, where a second competition took place… This year we decided to give the parents and teachers a chance to experience the JLC for themselves, and to see how they got on with the tricky Arabic language. This was as tense as the children’s rounds (with the parents obviously feeling pressure to do well!). It was clear to see many parents had been practising with their children, as some of the scores were amazing – congratulations to Sarah, who did brilliantly and definitely earned the bottle of champagne she took home with her! 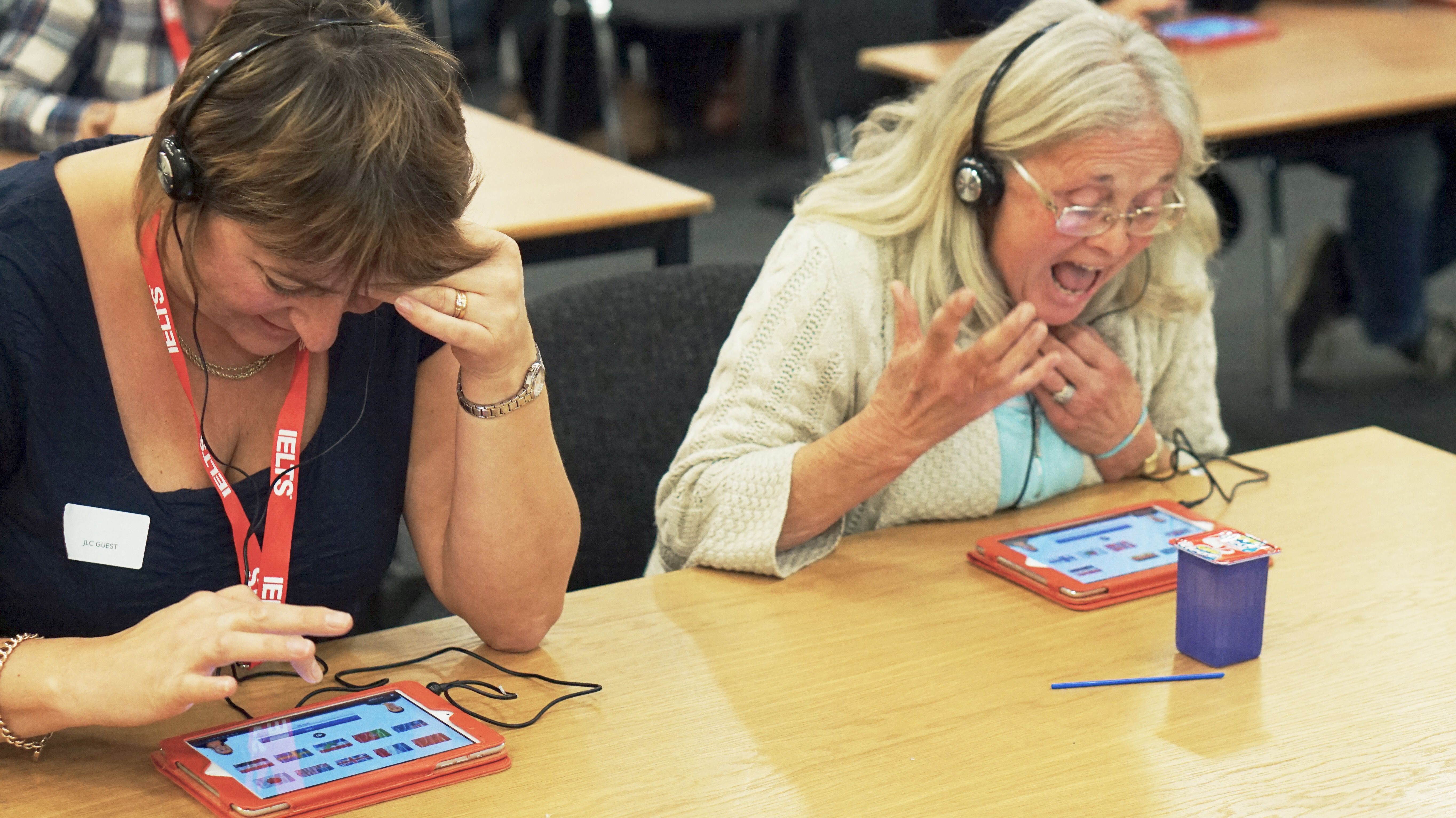 The final round for the children got away and the top five places were constantly changing. Our resident evil genius, Franco, added to the suspense by keeping the top two scores a secret, so the winner wouldn’t be known right until the end. We were extremely lucky this year to have the winner of Channel 4’s Child Genius, Thomas Frith, to announce the winner of the JLC 2015….

Congratulations to Tudor Mendel-Idowu, the winner of this year’s Junior Language Challenge! Tudor gained over 300 points during the final round and won the top prize of a family trip to Malawi. This gives Tudor and his family the opportunity to see the excellent work that our charity, onebillion does there. Tudor, who like Thomas has been on Child Genius, has entered the Junior Language Challenge three times, coming third in 2013. “I’m very proud,” he told us afterwards. “All the hard work has paid off, because it’s been quite a long time! My favourite language this time was Mandarin, because I enjoyed the way it related to other languages I’d learnt before.” 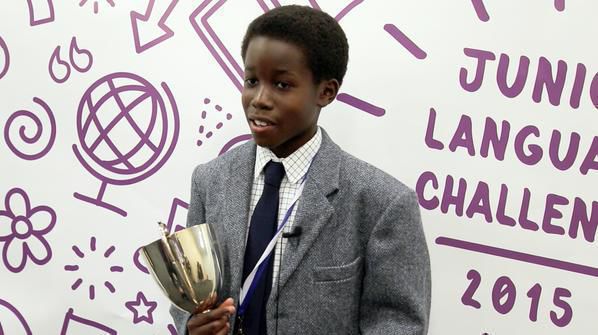 Tudor’s prize was awarded by 12-year-old Thomas, who knows exactly how he feels after winning Child Genius earlier this year. Thomas also presented a cheque for £5,545 to Andrew Ashe from our charity, onebillion. The money will go towards the development of a solar-powered projector for teachers to use in primary schools in Malawi. 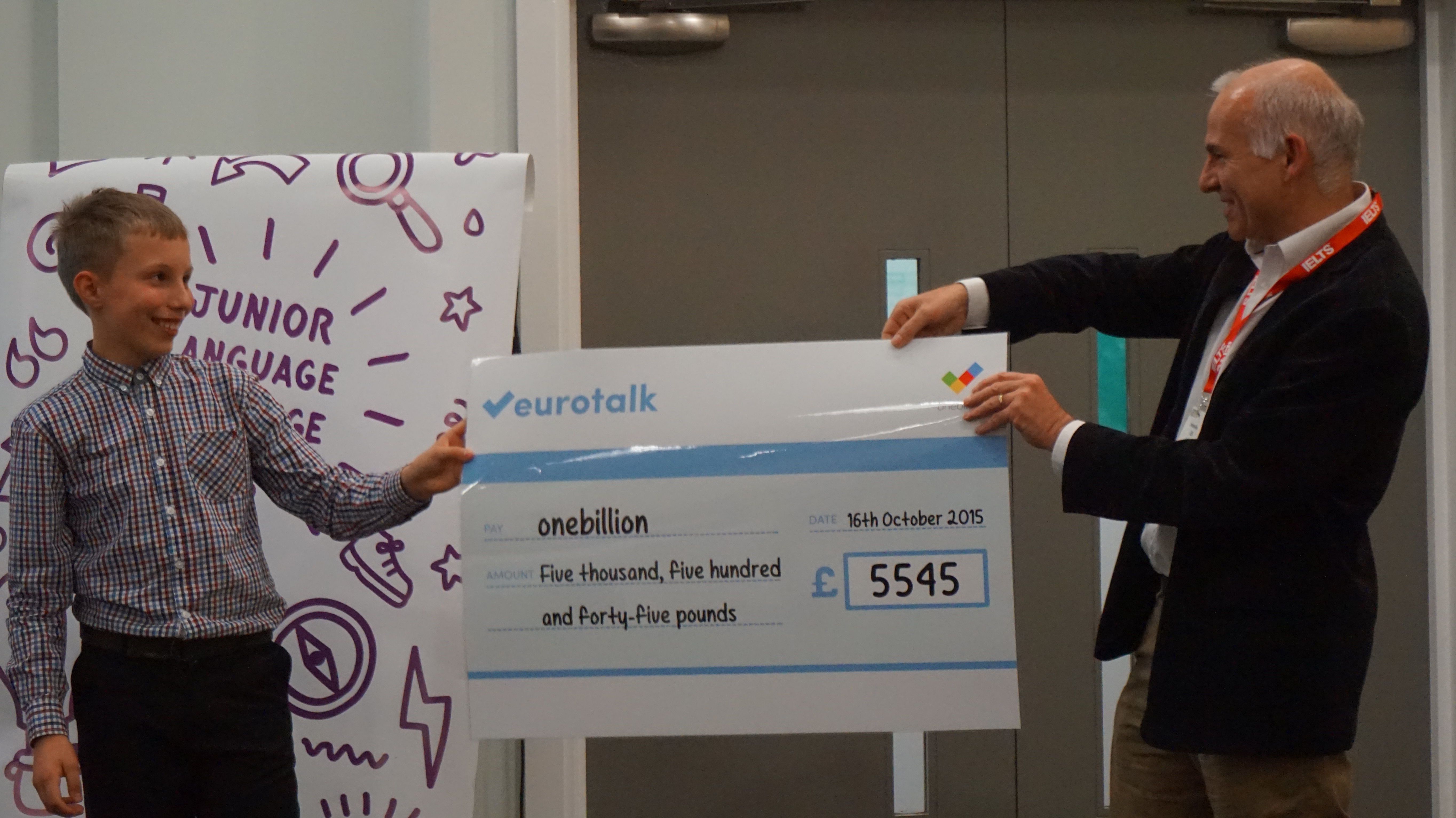 Our runners up this year also did amazingly in the final, with Aalaya Sanjeeva who came second and Isobel Eason who was just behind in third. The final was an excellent example of how brilliant all the children who took part in the JLC are at picking up languages – and also of the importance of perseverance; our top three had all taken part in the JLC in previous years. Every one of the 33 children that made it to the final should be so proud; you were all incredible! So thank you to: Olivia, Severin, Benjamin, Andrey, Gavin, Farah, Ritisha, Leyah, Saskia, Isobel, Aalaya, Nithya, Cristina, Cassandra, Anais, Isabella, Laura, Jamie, Reuben, Lydia, Aurelio, Rona, Ethan, Abigail, Monisha, Ben, Benitto, Grace L, Grace B, Louis, Sumayyah, Emma and Tudor, for taking part and putting so much effort into the JLC! 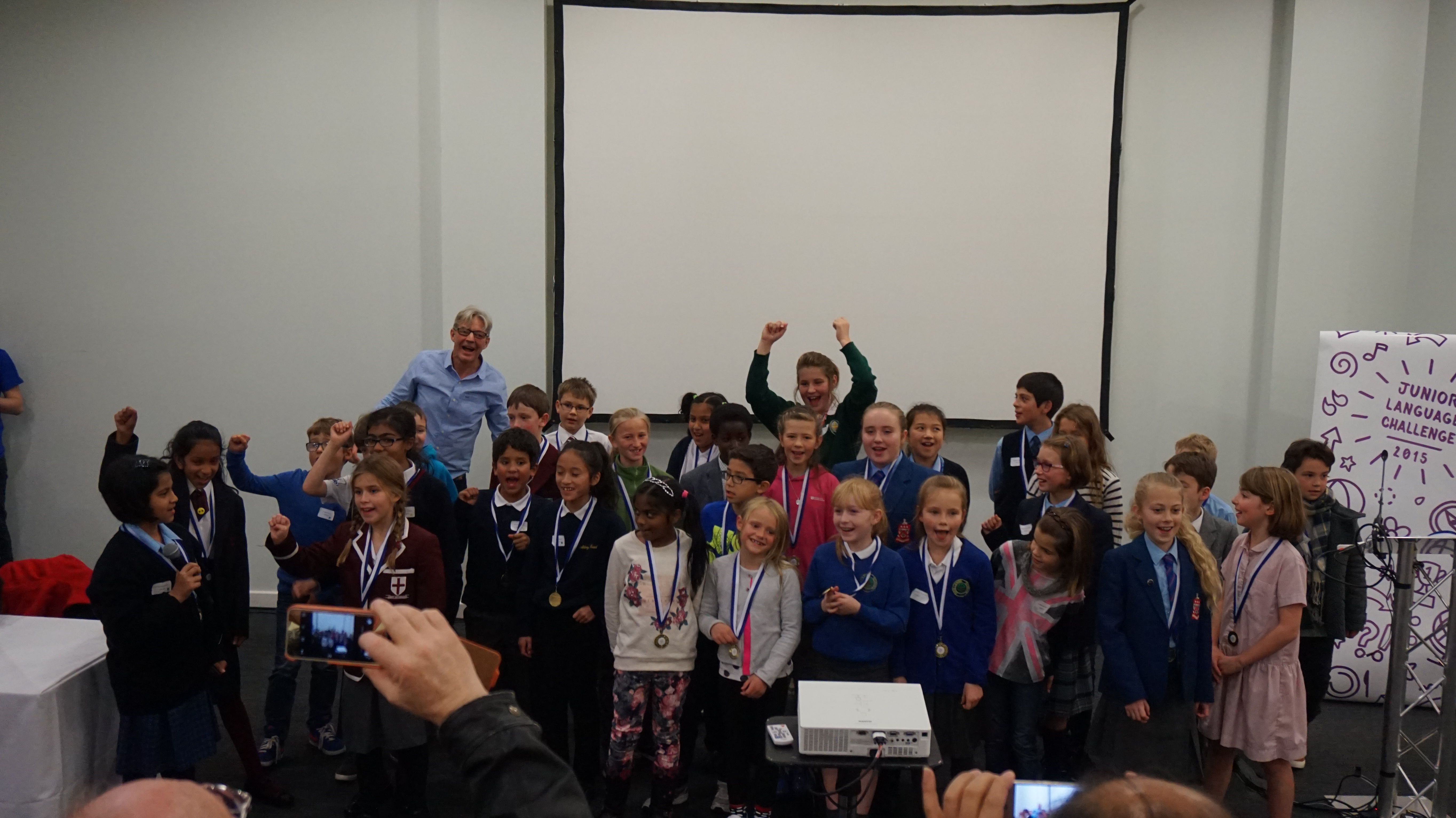 If you would like to know more about the Junior Language Challenge and how to take part in 2016, please sign up to our mailing list on the JLC website; you can also find out more about the JLC there too, or email us with any questions.

In the words of our brilliant guest, Thomas: “Languages are really important, they’re fun, they stretch your mind and let you talk to other people, which I feel is polite, rather than expecting everyone else to learn English.” We couldn’t agree more.

The JLC will return in March 2016 and we hope it’ll be bigger and better than ever!