This week on the 5th, 6th and 7th November, it’s the Yi Peng and Loy Krathong festival in Thailand, otherwise known as the Lantern Festival. After seeing some pictures and watching some videos, it looks like one of the most breath-taking festivals I have seen.

Both of the festivals are a spiritual, ancient and sacred affair that invite new beginnings via spiritual cleaning. Yi Peng is where thousands of people gather to release Khom Li (Lit lanterns) into the night sky and make a wish, as well as paying homage to the Buddha. The sky is completely transformed into a wonderful and mesmerising spectacle. 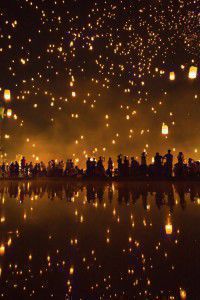 The Loy Krathong festival is believed to be an ancient Brahmanic or Indic festival. Originally it was a ceremony where people paid their respects to three different gods known as Phra I-Suan (Shiva), Phra Narai (Vishnu) and Pra Phrom (Brahma). However, one hundred and fifty years ago it was adopted by Buddhists as a ceremony to honour the Buddha. Today people create small floating vessels made from banana stalks and decorated with incense, offerings, flowers and candles. They are then floated down the river and are meant to symbolise the drifting away of bad luck and misfortune. Many Thai people also see it as an opportunity to honour the goddess of water. 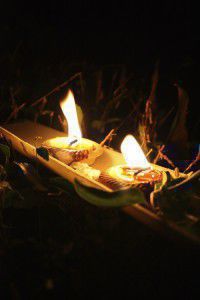 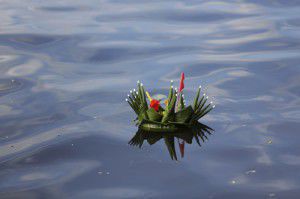 Did you know that over 60 million people speak Thai? Outside of Thailand, the largest concentration of Thai speakers is in Los Angeles where there are approximately 80,000 immigrants.

In terms of learning Thai, it is very important to get the tones correct. Within the language there are five tones:

It is very important to distinguish these tones, as getting them wrong may lead you to say something completely different to what you had intended. For instance:

They all look like they should be spoken in the same way; however, it is the tone that differentiates the word.

This week we want to hear if any of you have been to Thailand and your adventures you had had whilst over there. Or maybe you’re learning Thai, and have some tips for our readers? Let us know in the comments!

1 thought on “Language of the week: Thai”