A few weeks ago I wrote about my plan to get back into speaking Spanish regularly. First off, a confession – I haven’t actually spoken Spanish to anyone yet, but that doesn’t mean I haven’t been busy!

I’ve always been pretty fluent at reading Spanish. One of my proudest achievements is reading Lord of the Rings in translation – although I think I might be prouder of getting through the books (especially the end of the third volume, which, in my opinion, was hard work) than of understanding the Spanish. To be honest, a lot of the made-up words are the same or very similar – an orc is un orco, a hobbit is un hobbit… You get the idea. My point is, I still try and read books in Spanish quite often, and generally find I can read at much the same speed as I do in English. (My book club were impressed with me recently when I read our chosen novel for that month, Eva Luna by Isabel Allende, in the original Spanish – and was even able to have a semi-intelligent conversation about it.)

Unfortunately I can’t say the same for my writing, listening and speaking skills. I decided to start by tackling the listening, which has always been my main problem and is probably why I avoid conversation when I can. Spoken Spanish tends to be very fast and my poor, out-of-practice brain takes a while to catch up and process what’s been said. This generally means me standing there looking slightly baffled for a few seconds before formulating a response, which isn’t fun for anyone. To avoid that unfortunate scenario, I decided to start by watching some movies and TV shows in Spanish before I risked talking to real people. Yes, it’s a cop-out, but I felt I needed a little confidence boost before venturing out into the 3D world. 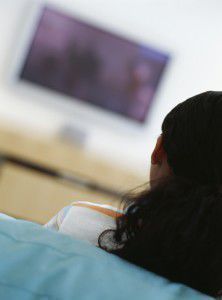 I started by watching Pedro Almodóvar’s 1988 classic, Mujeres al borde de un ataque de nervios (Women on the verge of a nervous breakdown), featuring a fresh-faced Antonio Banderas, who always brightens my day 🙂 It’s a very funny film, but with real emotions at its heart, so if nothing else it was an enjoyable 90 minutes. Unfortunately my copy of the movie has English subtitles which can’t be turned off, meaning I had to concentrate twice as hard to understand the Spanish whilst making a conscious effort not to glance at the bottom of the screen (which wasn’t always successful). But it didn’t go too badly and I was more or less able to follow what was being said, so, feeling a little better about my abilities, I decided to try a new challenge.

I don’t know about anyone else but I found the TV series Lost really confusing, and I still don’t completely understand what happened at the end (don’t worry, I won’t reveal any secrets, in case anyone hasn’t seen it yet – but if you can explain it to me, let me know!). So maybe deciding to watch it again in a different language isn’t one of my smartest ideas, but I figured it couldn’t be any more confusing in Spanish than it is in English. I also thought it would be a good place to start – I’ve seen all the episodes before, so I know the context, but not so recently that I can remember what the characters are saying. So far I’ve watched about six episodes and it seems to be going pretty well. I’m managing to follow the majority of the dialogue and my brain isn’t hurting too much, although it’s early days; I know when I reach season 5 I’ll struggle, as I can’t get my head around the concept of time travel in any language! In between episodes I plan to watch more films that are originally in Spanish rather than dubbed (top of my list is the fantastically random Jamón Jamón). It’s definitely encouraging to know that I haven’t forgotten everything I learnt at school and university, so I think the confidence boost is working.

In my next post, I’ll be writing about … er, writing. And perhaps (just perhaps) by then I might be brave enough to actually talk to someone…

3 thoughts on “Lost in Translation – literally”