Happy New Year! Whether you’re already there, or have a few more hours to wait, we hope that 2015 will be a fantastic year and bring you everything you hope for.

As the celebrations get underway, here are a few interesting New Year traditions from around the world…

In Spain, eat a grape for each strike of the clock at midnight; if you manage to eat all twelve during the chimes, you’ll have twelve months of good luck.

This is the tradition of being first into a house after midnight, in Scotland and Northern England. The first-foot should bring gifts of a coin, bread, salt, coal, or whisky, which represent financial prosperity, food, flavour, warmth and good cheer. The best kind of first-foot is believed to be a tall, dark-haired man.

A tradition from German and English folklore says that you must kiss someone at midnight, and that that person will be significant in your future. If you don’t kiss anyone, it means you’re doomed to a year of loneliness. Apparently.

In Chile, if you want good luck and prosperity in the new year, wear yellow underwear – inside out – and then turn it the right way after midnight.

Making a lot of noise

In the Phillippines, the New Year’s custom is to make a lot of noise at midnight, to frighten away evil spirits. People buy small horns called torotots and also use paputok (firecrackers) as well as banging pots and pans and revving their vehicle engines.

In Colombia, the previous year is seen out by families as they build large stuffed male dolls filled with different materials, and items that they no longer want or that have sad memories attached to them. Then they burn the doll at midnight, which represents burning the past and looking to the future.

The first thing you should eat after midnight in Hungary is lentil soup, because it’s believed that lentils will bring you riches in the new year – and the more lentils you eat, the richer you’ll be.

In various towns on the Welsh coast, brave swimmers take a dip in the freezing sea on New Year’s Day. Some people do it in fancy dress – and no, we don’t know why.

How will you be celebrating the New Year? Whatever you’re doing we hope you have a great time! 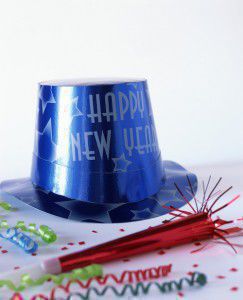