Happy Leap Day! The 29th of February comes around every four years, but how much do you know about this extra day?

What is Leap Day?

Originally the Sumerians divided the year into 12 months and allocated 30 days for each month. This was adapted by the Egyptians, who realised that this didn’t fit in with the amount of time taken for the Earth to orbit the sun. The Egyptians decided to add five days in at the end of each year to give us the 365 days we have now; however, these five days were just for partying and celebrations – sounds good, right?! The leap year then came about from the Gregorian calendar, with the idea that one day would be added onto February every four years.

Leap years around the world

No one seems to know why it is called a ‘leap’ year, but there are other names for it around the world. In German a leap year is called ‘Schaltjhar’, in Russian it is ‘année bissextile’ and in French it is similar with ‘anno bisestile’. Interestingly in Italian it is called ‘l’ann d’la baleina’ which translates to ‘the whale’s year’, after a belief that whales only give birth during leap years. In many countries a leap year is believed to be bad luck; Russia and the Ukraine believe that getting married or buying a house during a leap year is unlucky. In Taiwan it is considered really unlucky; the Taiwanese go so far as to say that parents are more likely to die during a leap year.

What’s all this about women proposing? 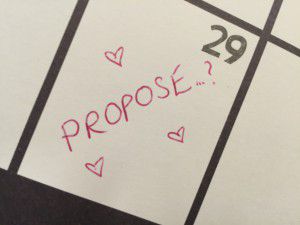 Perhaps the most well-known leap year tradition is the idea that women can propose to men in this year. This is believed to be introduced by an Irish nun who thought that women had to wait too long for suitors to propose and convinced St Patrick to give women permission to ask a man to marry them once every four years. It was thought that if a woman did want to propose she had to wear breaches or scarlet petticoats in order to do so.

In certain European countries it was thought that if a man refused the proposal they should pay a penalty. In Finland they had to buy the lady fabric so she could make her own skirt. In Denmark, the suitor had to buy her twelve pairs of gloves so the lady could hide her embarrassment at not having an engagement ring.

What if you’re born on 29th February?

People born on the 29th have to decide which day to celebrate their birthday for the other three years. However the chances of being born on the 29th of February are 1 in 1,461. For those that are born on this day, the city of Anthony (next to Texas) celebrates the leap year with a four-day festival; this is done to celebrate the leap year babies’ birthdays. There are also Facebook groups for people born on this day, and many restaurants and retailers offer ‘leap day’ deals.

Is it your birthday today? Or did you propose?! Tell us about it!

1 thought on “Not your average Monday: what’s so special about 29th February?”