Starting to learn Spanish has been an amazing journey. So far, the language and the people are really interesting, and it’s nice to know that a large population of Americans can speak the language. After long hours of practice, I am sitting here writing a post, while listening to my favorite Spanish rap songs.

Spanish class helped me in some ways and has hurt my interest in others. This was due to the grammar, and also we weren’t actually speaking. As much as I love doing grammar workbooks and vocabulary quizzes, I was more interested in sounding like Don Juan seducing girls. 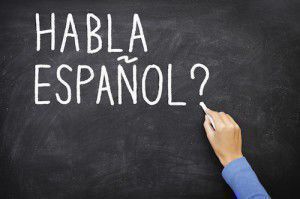 Spanish is a great language and it has so many benefits, the first being that by speaking the language you can talk to a much larger portion of the world. Spain, Colombia, and Buenos Aires are filled with a lot of activities and people to talk to. Something that most people might not know is that, by speaking Spanish, you can also talk to older generation Filipinos and people from Israel, Greece, Turkey, Yugoslavia, and Bulgaria. On top of this, after Spanish, Portuguese can be acquired with half of the work already done.

I love the pronunciation for Spanish. You can be fairly understood without going through the work that a French student would go through. Of course, the hardest thing is rolling your ‘r’s, but don’t worry. It isn’t too serious and Spanish speakers can understand you without it. The pronunciation won’t take very long to master compared to other languages. That’s one of the benefits of Spanish.

After pronunciation comes vocabulary. This is easier than other languages due to the similarity of Spanish and English. We have a lot of cognates, like la sofa becomes ‘sofa’, or los pantalones becomes ‘pants’.

Spanish grammar isn’t really that bad, people make it seem a lot harder than it is. I’ve heard that Arabic, Hungarian, and Latin have intense grammar that makes Spanish look easy. That’s because Spanish is so similar to English. It only has a couple of additions, and most of the sentences can translate back to English and still sound comprehensible. One hard step is learning how to conjugate verbs. Past, Present, Future, Conditional, Imperfect, and the dreaded Subjunctive. All verbs have different forms that you must learn, but thankfully, most follow the same pattern. In a sense, it’s just more vocabulary disguised as grammar.

The hardest rule is differentiating between Subjunctive and Indicative forms. For example it stresses the ability to know the difference between the following sentences: We always eat after the class ends, and We are going to eat after the class ends. In Spanish, those sentences are different and it is up to you to memorize the difference along with the verb conjugations. Fun, right? Well it actually isn’t that hard. It just takes time to get the hang of it.

Spanish is an easy language for English speakers, however there is one harsh reality. Learning a language isn’t easy. It takes hours of work and practice, and sometimes we overestimate how hard it actually is. We create excuses for not learning the language. That is why it is important that you have the right motivation for learning a language. Knowing about the steps above will give you a heads up for Spanish, but if you don’t have the right motivation, you will set yourself up for failure. I have faith in your language learning experience. Use it wisely, young Padawan.