Today’s guest post is by Joe Paterson, a student at Keats School in China. Joe explains Chinese chengyu, which are absolutely fascinating and a perfect example of why we love languages so much – they’re all so unique and interesting. Do any Chinese speakers have more examples – or does the language you’re learning have an equivalent? 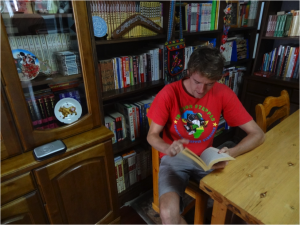 Each language has its own idiomatic richness. English is full of proverbs, sayings and odd phrases like ‘Bob’s yer uncle’. Chinese is no exception. When you learn Chinese in China, you will definitely come across all kinds of interesting and creative ways of saying and expressing things. 土包子 (tubaozi/earth steamed-bun) means a country bumpkin or someone with backward or poor taste, and to wear 绿帽子 (lv maozi/ green cap) means to be cuckolded. But perhaps the most uniquely Chinese idioms are 成语 (chengyu).

Chengyu are four character phrases that can be thrown into daily conversation but will throw up a wealth of meaning and significance to the interlocutor. Some of these phrases seem quite bizarre without a context, but many have a background story which explains the meaning and also conjures up images that reinforce the word’s meaning.

The first chengyu we will look at is 东施效颦 (Dongshixiaopin/ Dong Shi effect frown). The literal translation is altogether puzzling but a native speaker would instantly know the meaning to be to imitate someone but have the opposite to the desired effect. It is only when we know the background story to the saying that we can fully comprehend it. The story goes that there was a beautiful girl named Xi Shi in the ancient Yue state who was admired by everyone in the village. However Dong Shi, another girl, was ugly and could never command attention. One day when Xi Shi fell ill she walked out of the door holding her hand to her breast, her face contorted in pain. All the villagers were concerned at her trouble and pain. Seeing this, Dong Shi attempted to imitate her mannerism. But when the villagers saw such a grotesque sight they were repulsed and ran away.

Nowadays people might use 东施效颦 to describe someone blindly imitating a pop star’s outfit, only to be ridiculed themselves for looking stupid. Or, someone plagiarising another’s business idea only to find themselves go bankrupt.

The second chengyu is 刻舟求剑 (ke zhou qiu jian/mark boat search sword) which means to pursue a goal despite changing circumstances that should be considered, or, in short, being stubborn in a foolish pursuit.

The phrase comes from a story where a man drops his beloved sword into a river. He marks the side of the boat to show where the sword fell in. Once at the shore he dives back in to find the sword but to no avail. Of course between marking the boat and getting to the shore the boat has moved downstream. An example of when his phrase could be used might be if someone insists in investing in a certain product even if research shows that the product might not sell.

Other phrases are not strictly chengyu but are made up in the same structure and used in daily speech, even though most people may not know the exact origin of the term.

乱七八糟 (luan qi ba zao/confusion seven eight pickle) is a word used to describe anything messy and unorganised, from a bedroom to the way in which someone does something. The phrase actually originates from a late Qing dynasty novel by Zeng Pu, in which he describes the way craftsmen used to keep their workshops in a 乱七八糟 state.

Many common chengyu may not have such an interesting background but serve to colour the language with images that are created by the visual characters themselves or their meaning. 自讨苦吃 (zi tao ku chi/ self ask for bitter eat) provides an image for the idea to ‘ask for trouble’ and 利欲熏心 (li yu xunxin/ profit desire smoke heart) would be the equivalent of the English phrase ‘blinded by greed’, but creates an interesting image of the desire for profit creating a vapour masking the heart.

The ability to use chengyu well is very much admired in China and so it is well worth trying to improve one’s own use and trying to learn more. After a while some chengyu become so natural to explain a certain scenario or situation that sometimes they even surpass one’s own mother tongue equivalent word or phrase. Taking a Chinese language course from a professional language school could help to establish one’s linguistic and cultural foundation to be able to understand and use chengyus in a versatile way.

1 thought on “Why learn Chinese Chengyu?”