A couple of months ago, I visited Barcelona in north-east Spain. The city has something for everyone – history, architecture, beach and mountains. We were only there a few days – and on a bit of a budget – but we had great weather, and managed to explore the majority of this amazing city on foot. Here are my top ten reasons to visit Barcelona.

Barcelona loves its fountains; they’re everywhere. My favourite of these was the stunning display stretching from the Plaça d’Espanya to the Museu Nacional d’Art de Catalunya. It’s quite a steep climb, to the point that they’ve actually installed outdoor escalators to help you out, but well worth the effort for the view from the top. 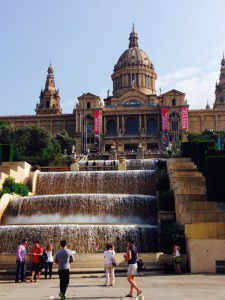 The work of architect Antoni Gaudí is everywhere in Barcelona – from the imposing (and still as yet unfinished) Sagrada Família to the popular tourist attraction, Parc Guëll. But you can also find examples of his work in the centre of the city, in houses like Casa Batlló and La Pedrera. If you like your architecture traditional, it may not be your cup of tea, but I loved the modernist designs; there’s so much to look at. And I think the Sagrada Família may be one of my favourite places of all time.

I’ll be honest, Barcelona airport is pretty confusing. When we arrived, I confidently assumed we’d be able to just jump on the metro and find our hotel. It turned out to be not that easy at all, as we had to first get a bus to another terminal, then pick up the overground train, before finally arriving at the Sants Estació, which turned out to be the main railway station in the city. But from there it was dead easy – like the London Underground, as long as you’ve got a map of the network, you can’t really go far wrong. Unlike the London Underground, the trains are air-conditioned, which was lovely after hauling our bags halfway across the city. And the 10-trip tickets, which you can use on any form of transport, were perfect for our three-day stay.

Ah, churros. We took a walking tour of the Gothic Quarter and La Rambla, during which our guide pointed out a café, which she said did the best churros in Barcelona. Afterwards, it seemed rude not to take her advice, so we retraced our steps to the café she recommended – Granja La Pallaresa in Carrer Petritxol, just off La Rambla – and asked for the churros y chocolate. I don’t know if they were the best in Barcelona, but they were pretty amazing.

Barcelona’s famous tree-lined shopping street, stretching from the city centre down to the sea. It’s a pity that it’s become known more as a place where you’re likely to get robbed, but it’s still well worth a visit – just remember to hold on to your handbag. And don’t feel you have to stick to the main street; some of the little back streets have more choice and are a bit cheaper too, and you’re more likely to be offered free samples of turrón (if you’re offered, take it – it’s yummy). Check out La Boqueria too – it’s a huge food market selling just about everything you can imagine: fruit, fish, meat, sweets, tapas, paella, sangria… You could easily get lost in there, but at least you wouldn’t starve 😉

My friend and I had been to Barcelona on a school trip years ago, and pretty much the only bit we remembered was the sea front. Cross the bridge to Port Vell, where you’ll find restaurants and a very modern shopping centre (I had to be physically dragged out of Desigual), an aquarium and an IMAX cinema, or keep walking along the shore to get to the funfair and, just beyond that, the lovely sandy beach. Once you’re there, be prepared to say ‘no, gracias’ repeatedly to the guys trying to sell you overpriced sangria; they’re not at all pushy but there are a lot of them.

The Olympics were held in Barcelona in 1992, and you can now visit the stadium for free (well, I say ‘visit’ – you can walk in, have a look and leave again). It’s looking a bit old and tired these days, but it was easy to imagine it filled with a cheering crowd just over twenty years ago. While you’re there, head around the corner from the stadium to check out the impressive Torre de Comunicacions de Montjuïc, and – you guessed it – more fountains. On a clear day, the views from up there are incredible.

Possibly one of the most beautiful buildings I’ve ever seen, and it’s not even finished yet. Gaudí’s unfinished masterpiece, the Basílica i Temple Expiatori de la Sagrada Família, is one of Barcelona’s biggest tourist attractions – we had to queue for 45 minutes just to get our tickets, and then we had to come back two hours later to actually get in. But it was so worth the wait. From the astonishing detail on the outside to the breathtaking stained glass inside, I honestly can’t recommend it enough. It somehow manages to be both modern and timeless at once, and the sheer size of the place is enough to leave you speechless. I can’t wait to see it when it’s finished; I think it’s going be pretty spectacular. 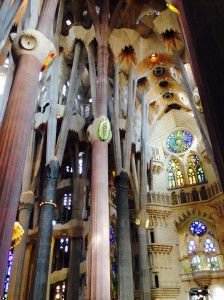 This might not sound like a very interesting reason to visit a city, but there’s a lot going on in Barcelona just now. My friend and I got chatting to two stallholders in La Boqueria, who, on discovering we were English, were keen to know what we thought about the Scottish independence referendum, which had taken place the week before. Catalonia’s currently engaged in a debate about this issue for themselves, with a recent poll showing 80% of people are in favour of independence, but the vote itself being ruled unconstitutional by the Spanish government. It’s hard to know what will happen, but it’s definitely an interesting time for the region and the country.

Well, sort of. On our first three days in Barcelona we had amazing weather – despite being late September, it was well over 20 degrees and we enjoyed gorgeous sunshine. And then on our last day, it rained. And not just a little bit of rain; it poured, all day, to the point where we eventually gave up trying to sightsee from under our umbrella and set off for the airport early. Where our flight was delayed, because of the rain. I guess you can’t win them all.

One word of advice – although Barcelona is in Spain, and everyone speaks Spanish, you’ll find on arrival that many of the signs are in Catalan, and you may be greeted in Catalan too. So even if you speak Spanish, I’d recommend picking up a little of the regional language before you go as well. Or if you really want to impress the locals, take uTalk with you and greet them in both languages.

I had an amazing few days in Barcelona, and would love to go back soon, if only to eat more churros and visit the Sagrada Família again (seriously, I can’t shut up about it).

Have you been to Barcelona? Any tips for my next trip? And most importantly, have I really had the best churros in the city, or is there somewhere better?

1 thought on “10 reasons to visit… Barcelona”