I recently visited a friend in Guernsey, one of the Channel Islands. Not really knowing what to expect, I loved it from the moment I got on the Blue Islands flight from Southampton and was offered a free glass of champagne (can’t think why). Here are my top ten reasons to visit this small but lovely island.

1. It’s English, but not England

The Channel Islands don’t belong to the UK, but they are part of the British Isles. (Technically they’re British Crown Dependencies.) When you come out of the airport, everyone speaks English, cars drive on the left, and the whole island has a very quaint English village feel to it. So if you want to experience England without actually going to England, Guernsey is the perfect place.

2. It’s French, but not France

Having said all that, geographically Guernsey is much closer to France than it is to England, and you don’t have to go far to stumble upon a French café or boulangerie. There are also, unsurprisingly, a lot of French residents and visitors. Many of the place names look very French too, although confusingly most of them are said with an English accent. Castle Cornet is pronounced like the musical instrument, for example, rather than ‘cornay’, as you might expect.

I’m a bit of a sunset addict, so my friend made sure to include a trip to Cobo Bay, on the west coast of the island, where we bought some fish and chips and settled down to watch the sun set in the sea. Although we had to move several times to avoid getting washed away by the tide, the view was absolutely stunning, and it was well worth the epic walk from the bus stop to Cobo, which turned out to be a bit further away than we thought… 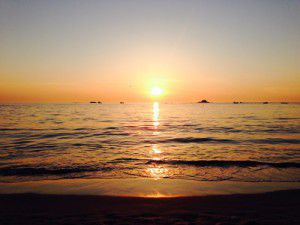 If you’re a history buff, there’s plenty to keep you occupied on Guernsey. Evidence of the German occupation during World War 2 is everywhere, from the concrete fortifications all around the coast, to the huge monument marking the island’s liberation in St Peter Port. There’s also La Vallette, the underground military museum, the 13th century Castle Cornet and the Victoria Tower, which was constructed in honour of a visit from Queen Victoria and Prince Albert in 1846.

My friend told me shortly after my arrival that I couldn’t come to Guernsey and not visit Le Petit Café, her favourite restaurant on the island. In fact during my three-day stay, we ended up going twice, once for dinner and then, not too many hours later, for brunch. It’s really cosy, with friendly staff and great French food. It’s also really easy to find, right at the bottom of the main shopping street in St Peter Port. Try the coq au vin!

Guernsey is far more than just sunsets. I’m not much of a photographer, but even I came away with some spectacular pictures, which could easily have been taken somewhere far more exotic. Both the island itself and the views across the sea, to the other Channel Islands, are amazing; you can even see across to France on a clear day. We were lucky because we had great weather, so were able to spend the whole weekend outside exploring and enjoying the sights.

Within minutes of my arrival, we’d made friends with the taxi driver, who insisted on giving me a selection of maps and brochures to allow me to make the most of my stay, even though I was visiting someone who lives there and knows her way around. The following morning, as I walked into town along the seafront, I was greeted repeatedly by people passing me. As someone who’s used to the stony silence of the London Underground, this was a pleasant, if slightly disconcerting, change.

Best known as the author of Les Misérables (the book, not the musical) and The Hunchback of Notre Dame, Victor Hugo spent several years in exile on Guernsey, and his house is now a museum. Don’t be put off by the slightly tense atmosphere in the waiting area before your tour; it’s well worth a visit, if only for the spectacular view from the top floor. And if you’re lucky you’ll get the tour guide who likes to tell colourful stories about Hugo’s mistress.

On my last day, we took a ferry across to the small neighbouring island of Herm (20 minutes away), which is just beautiful. No cars are allowed and the island only has about three shops, so it’s not the place to go if you want action, but if you’re looking for a lovely beach to relax on, I recommend Herm. We couldn’t stay long because I had to catch my flight home, but we spent an enjoyable couple of hours on Shell Beach, musing about what it must be like to live on a private island (like Jethou, very close by and shown in the photo below) and which kind of boat we’d buy if we could afford it (which we can’t, sadly). 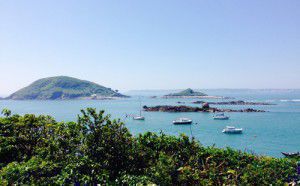 Typically, Guernsey enjoys more sunshine hours and has a milder climate than the UK, so it’s a great place to go if you enjoy a bit of summer sun. When I visited, although the weather forecast predicted 14 degrees and cloudy, it was more like 22, with not a cloud in the sky. Not ideal when you’ve packed for cooler conditions, but I wasn’t complaining.

Overall, Guernsey was a lovely surprise, and just goes to show you don’t always have to travel far to find somewhere amazing to visit. If you’re over in this part of the world (whether on holiday or because you live here), I definitely recommend checking Guernsey out.

By the way, we’d love to add Guernésiais to our range of language learning programs. If you, or anyone you know, can help with translation or recording, please get in touch. Thank you!

7 thoughts on “10 reasons to visit… Guernsey”