It’s been just over a year since I traded academia for the office, my three years spent studying English coming to an end and my career as a copywriter now starting to take shape. 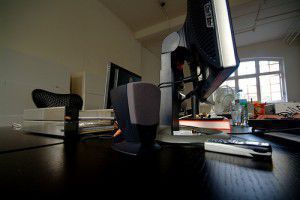 In that past year I’ve had to make an array of adjustments; getting used to waking when the sun comes up rather than when it goes down and trading clubbing plans for pension plans amongst the changes I’ve felt. Getting to grips with corporate lingo is something I’ve faced too – an English dialect of its own that can be just as baffling as Scouse or Geordie (perhaps even more so).

Concerned about its influence, the Plain English Campaign has tried to contain its spread, going so far as to say that it’s damaging the economy. That’s probably a tad extreme but there’s no doubt that office jargon’s causing contention, certain phrases creeping outside of the workplace and into our everyday language.

As such, if you’re planning on spending some time on these shores it might be a good idea to learn some of the basics. Here’s an overview of some of the most popular…

Heard in offices across the country, confusingly this doesn’t refer to playing baseball, it simply means to establish contact with someone, perhaps through telephone, email, or a meeting in person.

Example usage – ‘David, I think you ought to touch base with Boris. His political aspirations are getting way out of control.’

You’ll hear this in meetings a lot. Essentially, it translates as ‘in the future’. Why ‘in the future’ isn’t deemed good enough again confuses me, but hey ho, people seem to like using it.

Example usage – ‘I’ve got my eye on a Bugatti Veyron, so going forward I propose we cut costs and outsource to India.’

An acronym which stands for ‘Key Performance Indicator’, you’ll often hear this in appraisals and the like. Basically, the term encompasses anything that management can use to manage the effectiveness of a strategy or, you as an employee.

Example usage – ‘For someone brought in to increase productivity by 200%, Tarquin’s KPIs are woefully low. Clear his desk whilst he’s away at lunch.’

‘Thinking outside the box’

This phrase must be a nightmare for a non-native speaker, as there’s no boxes involved, it simply means to think unconventionally.

Example usage – ‘To prosper in the global race, we’ll need to increasingly think outside the box.’

Another acronym that I thought needed explaining, this stands for ‘Return On Investment’. Put simply, it refers to how much cash an investment in something like property or a marketing campaign reaps in the long term.

Example usage – ‘We invested £200 billion in subprime mortgages but our ROI appears to be less than 300 billionths of that. In other words, we need a government bailout.’

In my first year of office work, these five terms are the ones that I’ve come across the most. There’s many more though, as this article from the BBC reflects, and if an episode of The Apprentice is anything to go by, there’s plenty more where that came from. I’d start developing an office jargon app if I were you, EuroTalk…

Mark James is a Copywriter for Crunch Accounting. If you’d like to touch base with him going forward, find him on Twitter at @MarkJames891.

And if you’re interested in learning some business English, you might want to try Talk Business, which is available as a download or a CD-ROM. It may not include the jargon above, but it’s a good place to start!