I remember the moment when we knew we were officially grown up in primary school – during French lessons with the headmaster.

MFL lessons are the norm nowadays but back in my time, French lessons were a weekly highlight, as they meant me and about a dozen classmates spent half an hour learning something the rest of the school did not already know.

As I moved onto secondary school, languages were eventually deemed ‘uncool’ and those who took French or Spanish past GCSE – myself included – were thought to be insane by their peers.

When I think about it, only French got a shoo-in at primary school. Spanish was introduced in the first year of secondary school but even then, all efforts were concentrated on learning and teaching French.

No-one seemed to care about German or Italian and everyone thought Mandarin was a fruit. 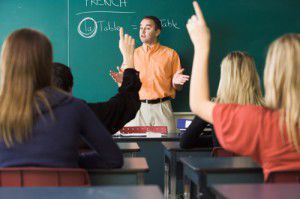 This makes me wonder – when did French become the ‘go-to’ foreign language at school?

Learning French is a current requirement in UK primary schools and the possibilities of school trips, exchanges and overseas partnerships are endless, but knowing how to speak it may not be as impressive as learning more obscure languages such as Swedish, Polish or Japanese.

The number of people learning a language nowadays relies on how influential it is in popular culture – just look at how many people have started to learn Na’vi, just because it was featured in James Cameron’s 2009 epic Avatar – and this can only be aimed at the younger generation, when ‘cool’ is key.

This is the aim of our annual language competition for primary schools, the Junior Language Challenge. Parents have commented that the competition has fuelled their children’s passion for learning new languages and has inspired them to take up different ones as options for GCSE.

I am hopeful that more unusual languages will be featured in the National Curriculum, but unless Justin Bieber turns around and starts learning Mandarin, whether pre-teens take language learning to the next step is debatable.

Where do you think today’s language learning is going?  Where can there be room for improvement?  And ask yourselves, in ten years or so, will French reign supreme or can Spanish or Mandarin take the crown as Most Popular Foreign Language to Learn at Primary School?