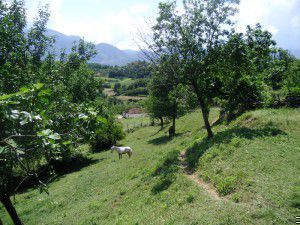 Nestled in the heart of the Mediterranean with Greece, Macedonia, Kosovo and Montenegro as its neighbours, most people still don’t know much about this amazing country.  Influenced by the Greeks, Romans, Italian and Turks, Albania does have a long and troubled history. But since communism ended in 1992 and the Republic of Albania was founded, it has remained more or less settled and it was chosen as the top country in the Lonely Planet list of ten top countries to visit for 2011.

To be honest, when I first met my Albanian husband Remzi, nearly five years ago, I did not know much about Albania myself – and I still meet people now who are not even sure where it is and think it is run by the Albanian Mafia!  But I have now been fortunate enough to visit seven times, I’ve met all of Remzi’s family and friends and experienced the warm hospitality of the Albanian people and the beauty of the landscape.  You also feel very safe; I remember on my first visit in September 2006, Albania were playing the Netherlands in a friendly football match in the capital Tirana and we happened to be walking past when the Dutch team’s coach got stuck on the turning into their hotel. The players decided to get out and walk – there were no police or security around and they just casually made their way to the hotel entrance. Cars on the main road did not even slow down; it was all very bizarre but typically Albanian – they do not like to make a fuss.

We have spent time in the mountainous North (where Remzi’s family are from) and the scenery is breathtaking, but I am yet to go to the beautiful and still unspoiled beaches in the South along the Ionian Coast, which is known as the Albanian Riviera. There are quite a few historic sites to see, like the ruins of Krujë Castle where General Skanderbeg fought off the Ottomans in the 15th century, and the many Byzantine churches and cobbled streets found at Berat Castle.

I have to admit I was quite slow off the mark in trying to learn the language, being a typical Brit and expecting everyone to speak English. The younger generation do but the majority of the population don’t, so it has been quite a struggle trying to communicate with most of Remzi’s family.  But two years ago I started working at EuroTalk so had no excuse not to use the resources readily available to me! And it made a real difference on my last visit in June, which was just as well as we stayed with Remzi’s parents for most of the week.  I have now decided to go to evening classes in the autumn where I hope to improve further and meet other people in the same situation as me with an Albanian partner.  I find some words and phrases easy but just the basics like hello (‘tungjatjeta’) and goodbye (‘mirëupafshim’) are a bit tricky.   So hopefully by my next trip I will have improved enough to have a proper conversation with my in-laws and get even more out of visiting such a wonderful country.

Do you have a partner from another country?  How have you coped with learning their language?