Talking about Time: Insights from Other Languages

The following post is from Paul, an English teacher who lives in Argentina. Paul writes on behalf of Language Trainers, a language teaching service which offers foreign-language level tests as well as other free language-learning resources on their website. Check out their Facebook page or send an email to paul@languagetrainers.com for more information.

If you love languages, and you’d like to guest blog for EuroTalk, please get in touch; we’d love to hear from you.

Talking about Time: Insights from Other Languages

Time: it’s an essential part of our everyday life, and we talk about it constantly — yet we can’t see or touch it. In English, we usually conceptualize time as a linear distance along a horizontal plane. This seems totally natural to us: time can be long or short, deadlines can be close to us or far away from us, and we have no problem representing minutes and hours on a timeline. 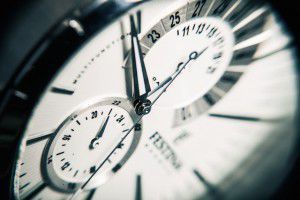 But as common as these expressions are, they raise some important questions about how we express time through language. As we’ll see, we often use conflicting metaphors to describe the passage of time. And other languages express time in a completely different way, challenging this anglocentric notion of time that seems so natural to English speakers.

Does time move around us, or do we move through time?

There’s no question that our relationship to time is a dynamic one: days pass, we get older, and the future becomes the past. But who’s doing the moving: time, or us? Expressions like “time flies” or “the hour dragged on” suggest that time moves and takes us with it. Indeed, if we talk about an upcoming test — “The final exam is getting closer” — we can certainly phrase it in terms of time moving towards us.

But we can also talk about the same test by saying “We’re getting closer to the exam date”. Suddenly, the relationship is flipped: now time is static, and we’re moving through time into the future. Indeed, language enables us to conceptualize time in terms as a static entity that we move through, as well as a dynamic entity that moves around us.

In just the English language, we have already found some peculiarities about how we express time. But when we introduce other languages into the equation, the picture gets even more interesting.

Is time horizontal or vertical?

In English, regardless of whether time moves towards us or we move through time, this movement is definitely horizontal. The words we use to describe time — “push back” a deadline, “be ahead” of schedule — are the same ones we use to describe horizontal distances (e.g., “take a step back”, “walk ahead of her”). That is, for English speakers, time is horizontal, with the past behind us and the future in front of us.

But this isn’t necessarily the case in Mandarin Chinese. For Mandarin speakers, it’s possible to talk about time in the same way as English speakers, with time running along a horizontal plane. But it’s also common to use vertical terms to describe the order of events, days, semesters, etc. For instance, the words shàng (up) and xià (down) can be used to express temporal relations: xià ge yuè means “next month”, and shàng ge yuè means “last month”.

Thus, in Mandarin, our familiar horizontal timeline can be flipped vertically, with the past being up and the future being down.

Is time a distance or a quantity?

Two classic ways to express time are the timeline and the hourglass. However, these point to starkly different metaphors. Whereas a timeline suggests that time is a distance, an hourglass suggests that time is a quantity. In English, we generally prefer to talk about time as a distance — saying that something “lasts a long time” is more common than saying it “lasts a lot of time”. 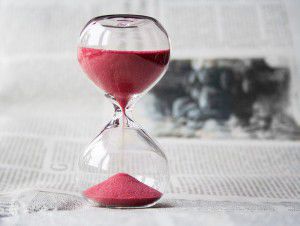 In Spanish, however, this isn’t the case. Indeed, saying tiempo largo (literally “long time”) sounds odd in most dialects; instead, mucho tiempo (“a lot of time”) is much preferred. Greek, too, features this tendency to use volume-oriented metaphors, using words like megalos (“large”) and poli (“much”).

Thus, whereas in English, our use of language favors the timeline, other languages like Spanish and Greek make greater use of the hourglass in their temporal expressions.

Is the past in front of us or behind us?

In English, we can look back into the past and forward into the future. This is as clear as day to us: the past is behind us, and the future is in front of us. Yet in spite of how obvious this may seem to us, this isn’t the case in all languages.

Take Aymara, an Amerindian language spoken in some regions of Bolivia, Peru, and Chile. In Aymara, the past is described as being in front of us, whereas the future is behind us. Though this conception of time seems jarring to us English speakers, it’s logical: we can see in front of us, just as we can remember the past; but we can’t see behind us, just as we can’t predict the future.

To our English-speaking brains, it seems only natural that time is a distance that moves horizontally. But as we’ve seen, this isn’t necessarily the case across languages: time is a complicated concept, and can be expressed through a variety of metaphors. Indeed, as any language learner knows, languages aren’t just sets of words, but rather bring with them a whole new way to view the world. That’s just one of many reasons why learning a language is such a great use of your time — whether that time be above you, below you, in front of you, or behind you.