Over the last six months we’ve had our new free app uTalk translated into over 30 languages, and dealt with over 120 native language speakers who’ve either translated or performed the scripts. Along the way we’ve confronted many challenges which really emphasise how one language can be ambiguous whilst another is precise, and vice versa.

In English, for example, we can go to the shop and ask for a pepper without having to specify the colour, or order a boiled egg without stating whether it should be hard or soft; we refer to brothers and sisters without having to qualify their age; we talk about grandparents, uncles and aunts without saying which side of the family they are on and, perhaps most infuriatingly for non-native speakers (those inclined towards a bit of juicy gossip), we can refer to friends and partners without having to say whether they are male or female. We can be elusive and a little bit mysterious through the vagueness of the English tongue. This is not always the case in every language, and here are a few examples of what we’ve learnt so far:

– Danish has two words for a wall, depending on whether it is an outdoor, brick-built wall or an interior wall.

– In Polish, we debated the straightforward English phrase He scores (a goal), which can be translated with a variety of terms depending primarily on whether he scores visibly, in the eyes of the spectators, or definitely, after verification from the referee.

– Mandarin has two separate words for a beach, one for a seaside beach and one for a lakeside beach. It also has two words for jellyfish, depending on whether it is the living animal or the edible delicacy.

– The Romanians use two words for snow – one to describe the falling droplets, one to refer to the layer already on the ground.

As well as these difficulties in trying to get different languages to correspond to each other, we’ve come across some interesting stylistic issues which don’t exist in English:

– In languages such as Czech and Slovak, our translators worried over the best way to tell the time, since it is common to express twenty-five past two as five to half past two, a construction which may initially confuse learners who have never encountered it. (English speakers may also be surprised when they first learn the time in many Slavic languages, where quarter past four is, literally, quarter of the fifth, the implication being that we are in the fifth hour).

– In Chichewa, our translators opted for entirely different and equally valid counting systems: one went for the traditional Chichewa way of counting based on the numbers 1 to 5, followed by increasingly complex and lengthy sums which require quick thinking and an aptitude for arithmetic in everyday transactions; the other opted for the commonly used English loan words- twente eiti (28), faifi (5) etc. Both systems are equally used, understood and widespread in Malawi. 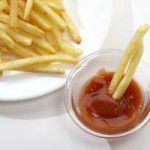 – Our Honduran consultant objected slightly to the inclusion of the word ketchup in the Latin American Spanish script, saying that la salsa de tomate would be more appropriate in his country. But this clashed with our Peruvian consultant’s advice, since ketchup is a widespread word in Peru and the salsa de tomate could refer to any other tomato-based sauce. Our Mexican translator chipped in that in Mexico ketchup is indeed commonly used, though catsup would be equally widespread… In the end, we settled on ketchup as the most generally acceptable in the largest number of places.

– In Polish, there is no good way to translate the phrases at the top of the stairs and at the bottom of the stairs: they would just say on the stairs in both cases. Part of the reason for this is the strange repetition you get if you specify at and on – na górze na schodach. The same odd-sounding repetition caused problems in the Spanish translation of I’m leaving tomorrow at eight in the morning, since the words for tomorrow and morning are identical, thus Me marcho mañana a las ocho de la mañana. It sounds so strange that people would prefer to leave out the first mañana.

These are just a few of the little points of interest we encounter on a regular basis in our translation project, and we’re looking forward to finding more and sharing them with you!

uTalk is now available from the App Store – it’s free to download and includes basic words in 25 languages, with options to upgrade for more vocabulary.

1 thought on “The challenges of translation”