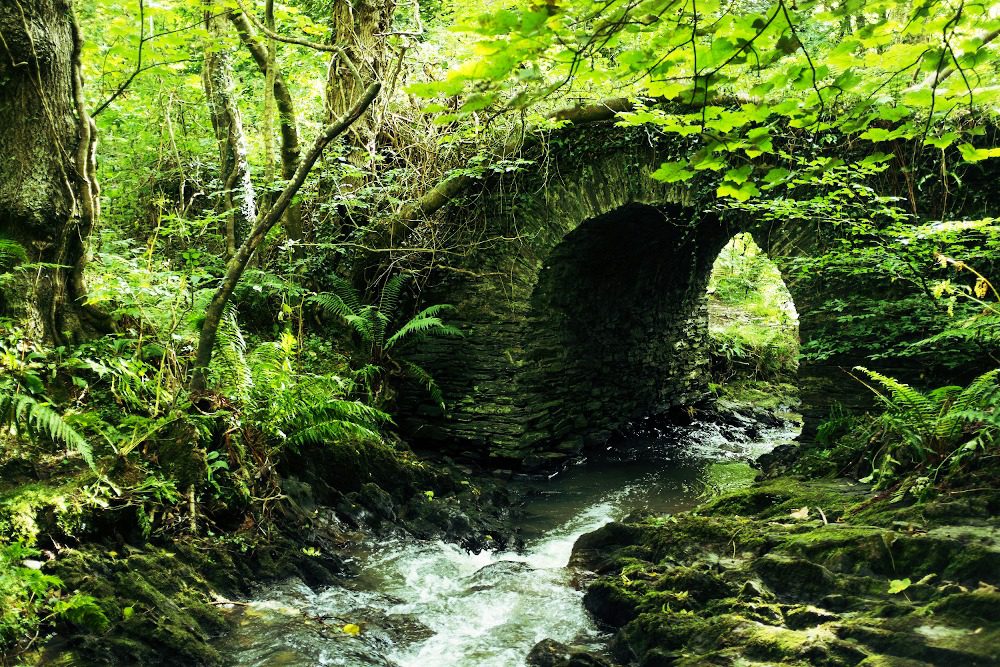 Find out about troublesome fairies, Viking ceremonies, and the Celtic language of Manx as the Isle of Man celebrates its national day – Tynwald Day – on Monday 5th July.

Folk on the Isle of Man may not always believe in fairies but they don’t believe in taking any chances.

It’s traditional to pay your respects to the ‘mooinjer veggey’ (Manx for ‘the little people’) when you cross the Fairy Bridge on the Isle of Man.

“I always greet them with ‘moghrey mie’ (good morning) or ‘fastyr mie’ (good afternoon),” explains local Sophia Taylor, 18, who has spoken the island’s native language since she was two years old.

“There’s a superstition that if you don’t greet them when you cross the bridge, bad things might happen – like getting a flat tyre!”

Manx is a Celtic language spoken on the Isle of Man, where it is known as Gaelg. It is descended from Irish and, like Irish, shares a healthy respect for fairies.

This is important, as they have a reputation for being tricksters if you upset them and even calling them fairies can trigger consequences!

Sophia explains: “They aren’t really referred to as fairies in Manx because they’re likely to take offence and cause trouble, so we call them other names instead, like ‘lil’ fellas’ or ‘adhene’, which means ‘themselves’.”

Sophia learnt Manx, which is classed as endangered by UNESCO, at pre-school and at the Isle of Man’s Bunscoill Ghaelgagh (literally ‘primary school Gaelic’), which is the only school in the world where children are taught all their lessons in Manx.

Children at the school sing songs in Manx, including ones that hark back to the island’s seafaring traditions, and the god Manannán. The island was named after him; its Manx name is Mannin (Man) or Ellan Vannin (Isle of Man).

Headteacher Julie Matthews says: “There are a couple of songs in Manx about Manannán which we teach the children. One which is about him living on Barrule [a hill in the south of the Isle of Man] and another asking him to put a blessing on the fishermen as they put out to sea, to see them and their catch safely back.”

Manannán, also known as Mannanán mac lyr (son of the sea), is an Irish sea god with a horse called Aonbharr, who can reputedly run over water as well as land.

The god is credited with protecting the island from invaders by concealing it in a cloud of silver mist. When enemies came near, he also had the power to make one man appear to be a hundred.

And, so the story goes, he could even turn himself into the Isle of Man’s famous symbol – a three-legged shape called the triskelion – and roll down from his hilltop home to confront invaders.

“Some versions of the story describe the wheel as a burning wheel of fire!” Julie adds.

In return for Manannán’s protection, every Manx household would traditionally take a bundle of rushes to Manannán’s hilltop home on Midsummer’s Eve.

Nowadays, this tradition is invoked on the Isle of Man’s national day – ‘Tynwald Day’ (July 5) – when the island’s parliament, called Tynwald, holds ceremonies outdoors at Tynwald Hill and indoors at the nearby Chapel of St John the Baptist.

For the ceremony, rushes are laid on the path between the historic, man-made Tynwald Hill and the chapel, as a reminder of the rushes given to Manannán.

The ceremonies are also a fitting tribute to the history of the Tynwald. Originally, it held all its meetings outdoors and is the oldest continuous parliament in the world, dating back over 1,000 years. (The Tynwald now routinely meets indoors in Douglas.)

The name Tynwald derives from the Norse word ‘thingvalla’, meaning ‘assembly place’. That’s because, as well as having Celtic ancestry, the Isle of Man was once the home of Viking raiders turned settlers who established the parliament.

For Vikings sailing from Scandinavia to Ireland, the Isle of Man was a convenient stopping off point, as well as being a useful trading post between Ireland and the Scottish islands.

Some modern-day place names have meanings which date back to Old Norse, such as Laxey (salmon river), Snaefell (snowy mountain), and Sulby (Sol’s farm). Surnames such as Corkill and Costain, derived from Old Norse for ‘Thor’s kettle’ and ‘Thor’s stone’ respectively, also bear witness to the continuing Norse legacy on the island.

Interestingly, many ancient stone crosses on the island show how, over time, the Norse and Celtic cultures blended together. These crosses, from the tenth century, typically commemorated a person’s life and included both Norse and Celtic engravings to the effect of ‘X put up this cross in memory of Y’.

But, of the two cultures, it is the Celtic heritage that has had the most lasting influence on the island. Historians speculate that it’s because Norse settlers assimilated into the local Celtic way of life.

This way of life included the Manx Gaelic language, which is still spoken today despite fears in previous decades that it was dying out. (UNESCO wrongly declared it extinct in 2009 and, after a vigorous protest from native speakers on the Isle of Man, including children from the Bunscoill, hastily reclassified it as critically endangered.)

Julie, who has lived all her life on the island, says: “I don’t think it ever really died out – when I was growing up, I used to go to Manx music sessions in the pub and there were always a few people having conversations in Manx. I wanted to know what they were saying, so I started to learn it.

“But there are definitely many more Manx speakers now than when I was younger; it used to be that I would know all the Manx speakers on the island and that’s no longer the case,” she adds.

The opening of the Manx medium primary school in 2001 is one of many success stories of Manx language campaigners.

When the Bunscoill first opened, twenty years ago this September, it started off with just nine pupils and currently has 54, after peaking at 67. In many cases, the schoolchildren are also the first people in their immediate families to speak the language.

“The parents are very interested in learning Manx because if you don’t know what your children are saying, they could be planning all sorts of things!” Julie says with a smile.

The Celtic influence is never far away on the Isle of Man, as signposts are commonly written in both Manx and English. And, as Julie goes out and about on the island, she cheerfully greets past and present pupils – and other Gaelg speakers – in their shared native tongue.

Passing the time of day by asking “How are you?” (kys t’ou?) can also elicit some very traditional Manx responses.

These range from ‘braew’ (fine) to ‘castrey cair’ (middling) and the wonderfully descriptive ‘goll as gaccan’ (going and grumbling)!

While many a local conversation will include the phrase ‘traa-dy-liooar’ (time enough), which describes the laidback Manx attitude that there’s time enough for everything.

There are also some colourful ways of expressing yourself in Manx, including “Ta crapplagh noa ayns my hoyne”, for when you learn something new, which literally translates as, “I have a new crease in my bottom.”

As well as interesting sayings, people on the Isle of Man also have a rich seam of traditional superstitions – particularly in relation to the spirit or fairy world.

Some of the customs which still persist are the practice of making and displaying ‘crosh cuirn’ – a protective charm to ward off evil spirits or tricks from Themselves.

They are made by threading one twig from a rowan tree (cuirn) through another to make a cross (crosh), and then wrapping scrps of sheep’s wool around the join.

Traditionally, they were hung in doorways, put aboard sailors’ boats and even, in times gone by, tied to the tails of cows by farmers keen to protect their livestock.

Many people still use them in their homes today, particularly on April 30th or May Eve (‘Oie Voaldyn’ in Manx), when evil spirits are said to be particularly active. It is also traditional to put yellow and white flowers across your doorway and in vases in the windows for much-needed extra protection.

Julie explains: “Our little folk are not like flower fairies or other such fairies in books. People stayed clear as there are lots of stories about being ‘took by the fairies’ – disappearing for a year and a day is the usual.”

Although it wasn’t just ‘themselves’ who were active around ‘Oie Voaldyn’. In times gone by, superstitious locals could also be up to no good.

People would sneak out early on May Day to collect dew from their neighbour’s land,” explains Julie. “It was like stealing someone’s good luck – but I’m sure no one would be doing that these days.”

On Tynwald Day (July 5th), flowers would again be used as a force for good. Locals traditionally wear a sprig of bollan bane (a wildflower that grows on the Isle of Man) to protect against evil spirits and ‘themselves’.

There is even a Manx piece of music called Bollan Bane, which is reputed to be the exact same tune as one played by the lil’ fellas. The story goes that it was overheard by a Manx local late one night on the hillside of Kirk Michael when he was wearing a sprig of the protective flower.

An awareness of ‘themselves’ and their place in the island’s Celtic past and present is clearly part and parcel of life on the Isle of Man. And, like her former pupil Sophia Taylor, the headteacher of the Bunscoill is not taking any chances when it comes to keeping out of trouble’s way.

Click here to learn some useful Manx words and phrases.

Five fun facts about the Isle of Man:

1. Schools on the island plan their summer half-term break to coincide with the world-famous TT (Tourist Trophy) motorcycle races, which have taken place on the island since 1907.

2. The creator of the Thomas the Tank Engine series of children’s books, Rev Wilbert Awdrey, took inspiration from the Isle of Man when he created Tomas’ fictitious home, the Island of Sodor. On a visit to the island, he became aware of the church district called the Diocese of Sodor and Man, in which ‘Sodor’ is an old name for the Hebrides, whose ecclesiastical link to Man had long passed. He then gave the name ‘Sodor’ to Thomas’ island home, fictitiously situated in the Irish Sea between the Isle of Man and the west coast of England.

3. The island’s national symbol is the Three Legs of Man (also known as the triskelion) with the accompanying motto ‘whichever way you throw it, it will stand’. It’s an apt motto for an island which has been variously visited, settled, and raided by Celtic, English, Viking, and Scottish seafarers.

4. It’s said that if you go to the top of the Isle of Man’s Snaefell Mountain on a clear day, you can see seven kingdoms: Man, Wales, Scotland, England, Ireland, Heaven, and Neptune.

5. The Isle of Man is a Crown dependency, which means it has its own government and is not part of the UK. But the UK Government is responsible for its defence and international relations of the island.